Since we are invited to numerous events every night, and thus plan our schedules based on what sounds like the most interesting and fun combination of offered fetes, the scourge of every Socialite/Society writer is to be invited to an event that has been misrepresented by the event promoter.  From claiming that stars will be in attendance for us to interview to offering “gift bags worth $500 dollars filled to the brim”, there is simply nothing more annoying than over inflated claims about an event.  Tonight was a prime example of this as I attended an event that perpetrated a complete fraud on its guests. 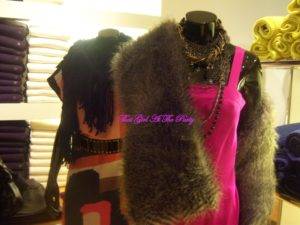 A week ago, I received an invite from a website which bills itself as “a go-to resource for all of your social needs” and claims to “enhance your social Life by providing info on fun events.”. (The site will remain nameless as this is more about what not to do than outing the organizers.) The invite stated that they were hosting a party at the Limited Pop-up Store (134 Spring St.) in Soho to celebrate the book “Girls On Top, by Nicole Williams, a career expert with “amazing advice along with goodies worth over $500 including a gift from The Limited* (exclusively subscribers) and 40% off The Limited’s chic new looks; all while enjoying comp cocktails.” *while supplies last.

The one problem.  None of this went down!  Instead, every party don’t imaginable occurred.  From each person that rsvp’d with the site not being on the list to none of the site representatives being visible at the event, this was a hot mess!  After a 10-minute wait in the cold rain, we got to the door only to be told that we were not on the list despite a confirmation.  Fortunately, I had my e-mail invite on me, so we were let in.  As gals entered, I overheard the two clippers saying that they were going to have to let everyone with these e-mails in, as if they had no idea that the site was sponsoring the event!  This is a definite party pooper!  Invited guests should be warmly welcomed not made to feel that they were begrudgingly let in!  When I inquired, it seemed as if no one knew who the sponsors were.  One person said that they were at the event.  Yet another claimed they hadn’t arrived yet!

In addition, every gal’s face dropped when she spied the paltry gift bags, which on first glance could be seen to be cheap and hardly worth the $500 that was billed.  The bag consisted of a bunch of cheap items like a plastic cardholder, two panty liners, and this weird combination of junk to advertise the Plan-B morning after pill!  I mean really!  This event was certainly not worth missing all of my other events and a trip downtown in the pouring rain!  I will be very leery of any soirees thrown by this promoter in the future!

Stepping Out and Stepping Up 2009 Fall Dinner