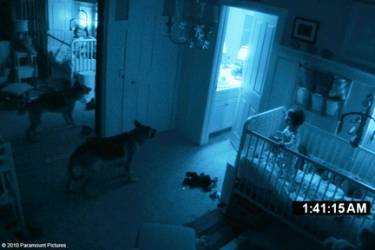 Halloween is always one of my favorite holidays since it signals the start of the eight-week holiday season.  In honor of this ghoulish day, here are my five picks for scariest movies of all time.

1. Ringu – (1998)  – Ringu, the original version of “The Ring”, was a zillion times scarier that the bad Hollywood remakes!  This left me so frightened that for two days, I had the lights on day and night  was afraid to turn off the TV, and was too frightened to pick up the phone.  If you have never messed with Japanese horror films, check this one out first.

2. The Exorcist – (1973) – Still the Granddaddy of them all, The Exorcist is very deeply disturbing.  I have never been able to get through the whole film in one sitting and can only watch bits and pieces of it.  Pea soup will never look the same again.

3.  Paranormal Activity 1 (2009) and Paranormal Activity 2 (2010) – These films are really one.  I just watched PA2 this weekend and it left a strange energy in my pad.  The first one was creepy because we had no idea what this thing was and it relied on the basic fear that everyone has of bumps in the night.   PA2 ramped it up a notch with more bumps, drags, and the creepiest ending ever!  I am still a bit jumpy in the house.  (To add to this, Dinah Washington Cat keeps bugging me out by staring into the night and knocking stuff over!)  Unfortunately, PA3 currently in theaters is not up to scratch and tries to over rationalize the scary occurences.  This basically renders the story less horrifying since unless the exact same thing has happened in your family, you don’t feel frightened.

3. Rosemary’s Baby (1968) – Can any concept be scarier than married to a bad actor and pregnant with a demon?  What’s a young mother to do?

4. Invasion of the Body Snatchers – (1978) – Creepy and brooding, Body Snatchers left the audience paranoid and afraid of their house plants.  The twist ending was heart breaking and horrifying.

5.  Nightmare on Elm Street – (1984) – Freddy’s debut is truly terrifying and I couldn’t sleep the first time I saw it.  The whole “murdered in your dreams” concept was original and creepy.  Unfortunately, the seemingly millions of sequels were played more for laughs than for frights.

Puss In Boots is Riotous Fun for the Whole Family!