Sponsored by
OZY Fest
Headline
June 3, 2019
by That Girl At the Party
0 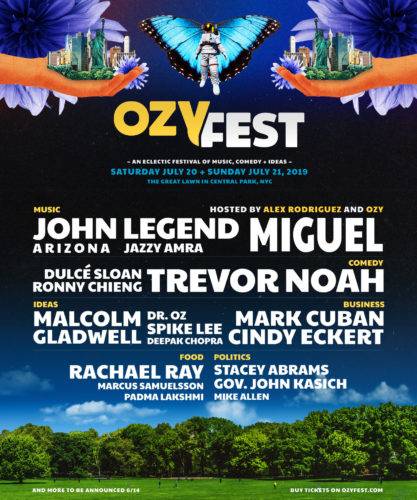 OZY Media, the media company bringing “the new and the next” to the Change Generation, has announced that the fourth annual OZY FEST will take place on the iconic Great Lawn in Central Park on Saturday, July 20th and Sunday, July 21st.

The unprecedented two-day event has been embraced by the City of New York as “New York City’s answer to SXSW.” OZY Fest 2019 is presented by Ally Financial, iHeart Media, Showtime & Well Being Trust. A limited number of presale tickets are available now at OZY.com/ozyfest.

An eclectic festival of music, comedy, and ideas, OZY Fest brings together today’s hottest musical artists, laugh-out-loud comedians, and some of the world’s most esteemed leaders and innovators across politics, business, technology, the arts and more, engaging in conversation, performance and demonstration like never before. It’s a new kind of festival that defies categorization; The New York Times called OZY Fest “part music festival, part TED talk, part food fair” and Thrillist proclaimed it “the only NYC summer festival you need to attend.”

“We are thrilled to be partnering with the City of New York to do something truly special,” said Carlos Watson, OZY co-founder and CEO.  “OZY Fest is like nothing else out there, bringing together the most culturally relevant and eclectic group of celebrities and thought leaders to Central Park, and creating the most interesting two-day weekend for all New Yorkers to enjoy.”

Tickets are on sale now at OZY.com/ozyfest

With 50 million monthly unique users and five million subscribers, OZY brings readers “the new and the next,” offering original content with an eye toward the future via its digital, podcast and TV platforms, as well as events. Called “the new media magnet for the news hungry” by Fortune magazine, OZY’s in-depth and high-quality journalism has attracted a number of high-profile media partners, including The New York Times, NPR, PBS NewsHour, TED, The Financial Times, Huffington Post and many more. Guest editors have included Bill Gates, President Bill Clinton, Sen. John McCain, Condoleezza Rice, Kamala Harris and Prime Minister Tony Blair.