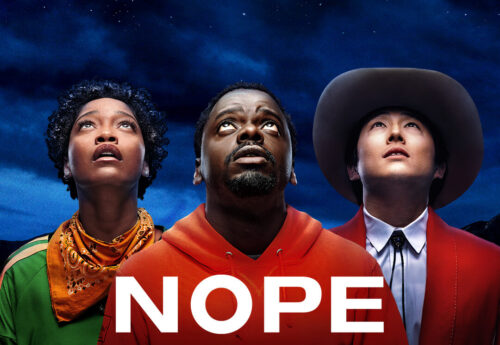 One of the buzziest films of the entire year, NOPE was one of the movies that I was most looking forward to seeing this summer.  Sadly, I have never been so disappointed in my life!  There was so much wrong with this film.

First of all, the basic premise didn’t work. A brother and sister want to get the perfect “impossible” shot of an alien ship. I’m sorry but if some aliens are invading my community and eating people, the LAST thing I am going to give a damn about is getting a picture of the dern ship. And I SURE AS HELL am not going to be luring the aliens out or hanging right where they are trying to get the dern pic.

Secondly, it’s boring. It’s such a slow build in the first hour that I almost fell asleep. When the first scare finally came, it was a lame jump scare! NOPE is way too long for the limited premise it presents. It should only be running at 80 minutes because it did not need to be this long to tell, what is basically, a short story.

And finally, Peele had 68 million to spend on this film. Where did it go?? Into the marketing?? Because the special effects were ass-backward and cheaply constructed. When the aliens suck people up into their ship, they are sucked into a cheap cloth tube. And why did the ship suddenly look like a giant kite in the final shots? One critic at my screening aptly said that it looked like a Christo exhibition, which was more pretentious posturing.

I hated NOPE so much because I loved Jordan Peele’s debut horror, “Get Out” and have seen it at least 10 times. I liked “US”, which was not AS clever but still really smart and pretty scary. But now I am starting to feel about Peele the way I did about M Knight Shamalayan after supporting him through a lot of dreadful movies based on my love for “The Sixth Sense”.  Fortunately, he finally redeemed himself and made “The Visit”, which is my fav of all his films besides, of course, “The Sixth Sense.” Peele seems to have shot his load with “Get Out” in the horror genre and is now just skating on past greatness. Because NOPE is a truly hot mess. It reminded me of when a new musical artist breaks with an album where every single track is amazing. Then by album 3 or 4, there are only a couple of great tracks if you’re lucky.  John Legend is a perfect example of this. “Get Lifted” was a masterpiece that I couldn’t stop listening to. Then his subsequent albums became less and less great with only one or two good songs per album. Peele, like Legend, is still talented. But that loving feeling is nowhere near how I felt at first discovery.

NOPE is a definite wait for streaming. Smoke a good joint before you see it. Then you may not feel so bad about wasting two hours.