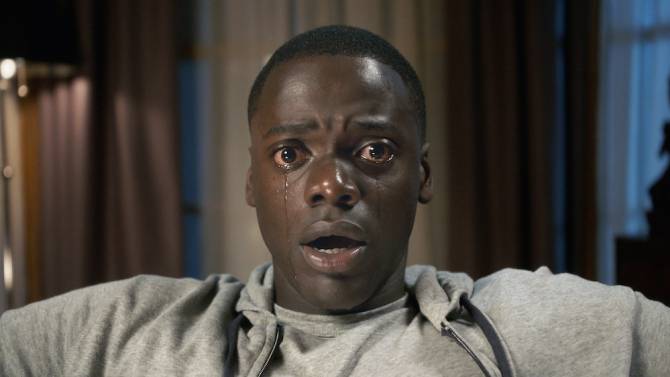 It’s been almost a week since I saw it and I still can’t stop talking about and recommending Get Out. It’s a twisty dark cross between “The Stepford Wives” and “Guess Who Is Coming To Dinner” with some “Rosemary’s Baby” thrown in for good cinematic measure. The film soars as both a truly creepy horror film and a glaringly accurate social commentary on racism in post-Obama America.

The plot is simple but terrifying. Orphaned black boy Chris (Daniel Kaluuya) has been dating white girl, Rose (Allison Williams) for five months. White girl Rose says, “Hey, I want to take you home to meet my parents.” As they are preparing for their trip to suburbia, Chris finds out that Rose has not told her parents (Catherine Keener, Brad Whitford) that he is black and thus, becomes nervous about meeting them. Once at her home, Rose’s wannabe hip white parents try to prove to Chris that they don’t have any racist tendencies by spouting stock lines like,“I would have voted for Obama a third time.” This is when the weirdness jumps off.  The white townsfolk seem overly glad to meet and impress Chris. And worse, something is not right with the few black folks that reside in Rose’s little hamlet. In fact, the black folks are downright creepy in their off-ness. Fortunately, Chris keeps in constant contact with Rod, his skeptical TSA agent friend and updates him regularly on the strange goings on. Played by Milton “Lil Rei” Howery, Rod serves as the voice of every black audience member, that ever yelled at a horror movie screen. Some fellow and sister critics claimed the film loses steam in the third act. But I beg to differ. Get Out is frightful and creepy, funny and original for two hours and 10 blissful minutes!

As a horror movie Get Out is awesome and has some great jump out of your seat moments. But where the film is truly terrifying, is the close to the bone jabs it makes at the racism of white liberals in America. As black people, especially in the professional realm, we often find that the very people, who rail the most against perceived racial injustices, the same people marching and protesting against Trump, the same folks who voted for President Obama twice – are often the most racist people in this country. Because in trying to over compensate and not recognizing racists tendencies in themselves, they often make worse racist assumptions than the stereotypical hood wearing, confederate flag waving, sister fucking, backward Trump supporting, loud and proud racists, they disdain.  I have seen this from both the frontlines of activism and my years of working in Hollywood.  For example, Lena Dunham can’t stand Trump. But at the same time, Dunham produced a tv show with no characters of color set in one of the most diverse cities and neighborhoods in the world. I would wager that there were few, if any, people of color in senior positions in her production office. This is racist. But Lena would never have realized it. This sort of unacknowledged racism is the American scab that Jordan Peele‘s film is picking at. It also explains why the Chris character isn’t suspicious a lot sooner. Because we all, as black folks, experience and brush off so much subtle racism on a daily level, we can relate to this character just letting things slide, till it is truly too late. From white folks repeatedly telling me that I was “so articulate” when I was growing up to the strange woman, who touched my hair in Whole Foods last week then falsely claimed she saw a thread drop (yes, that actually happened!) , I have had every type of well-intentioned racist gesture. It is the norm, which is what makes Get Out so relatable and scary to its black audience. We, like Chris, would likely not see what was going on till it we were tied to a chair either!

There have been inaccurate claims of the film itself being racist. But Get Out! is one of the most accurate and innovative thesis on race in America ever committed to film. If the Truth hurts, viewers, perhaps it is time to look in the mirror and go within.

Trump Brings His Crazy To CPAC 2017