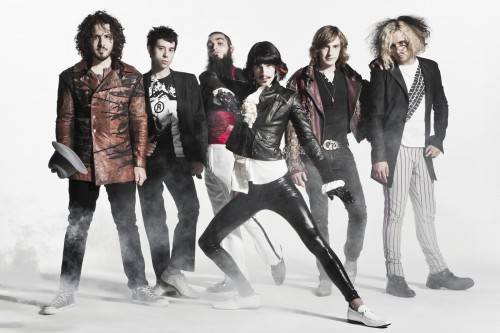 Harkening back to the 80’s and channeling Queen and Meat Loaf with some Red Hot Chiles (would love to see what George Clinton could do producing them!) thrown in, Foxy Shazam delivers infectious, funky, sing-a-long rock tracks.  And speaking of catching an infection, lead singer Eric Nally brought all kinds of hilarious, raunchy filth to the proceedings channeling everyone from Elvis to Lenny Bruce to Donald Duck.  His speaking voice sounds like he takes a hit of helium between each sentence.  I love that Nally takes gender and turns it on its head.  Purportedly married with kids, he is still comfortable enough in his sexuality to joking intro a song with the quip, “I like it big and Black.”  Naturally, there was some macho, probably closeted dickhead in the audience, who couldn’t quite take this ambiguity and started to heckle him.  But he shut up, once Nally stopped the show and threatened to pound his head into the pavement outside after the show to cheers from the audience. 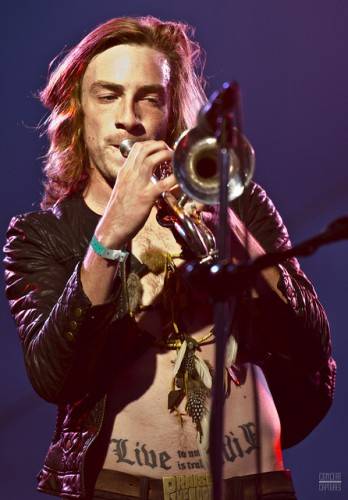 It is also mad odd, yet mega cool for a rock band to have a horn player.  And when it comes in the form of the most doable guy in the band, that’s an even bigger plus.  Alex Nauth is Foxy Shazam’s second front man, a hottie backup singer/horn player/gyrating sex machine of a dancer. Half naked and displaying that lean body that all hot rock boys have, he demonstrated his sexual abilities with a full on stage humping.  I’ll be having rock and roll fantasies ’bout that one for awhile after that flagrant display!  In the words of the legendary Morris Day, “Yessss!”   The varied looks of the band members were fun and eclectic ranging from this rock God of a horn player to the scrawny, now blonde (I prefer the Black hair/wig?) Nally with Sky White (can that really be his name?),  a mini ZZ top bearded bald dude on keys. Oh and by the way, the keyboard player stage dive….with his keys! 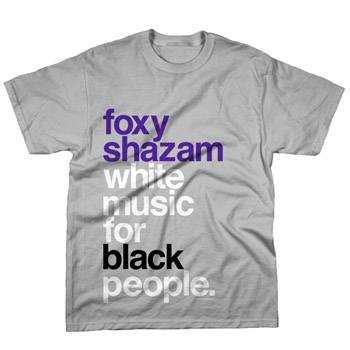 Taking vulgarity to a new level 21st century rock level, Nally gave his mike a prolonged blow job, talked of pussy and buttholes and sang an ode to big black asses, which was my favorite track for its sheer ludicrousness.  A skinny seemingly gay (he says he’s not) rock boy singing an ode to a big ass on a Black girl was stunning in its sheer offensive brilliance! The seemingly Zappa inspired “I Like It” is the best ode to Black Girls with big booties since Sir Mix A Lot‘s “Baby Got Back.”   (I joked with the guys after that, I alas, seem to have gotten the White people in my family’s ass genes.)  It is also the first rock tribute to Black chicks since Queens’ Fat Bottomed Girls and the Rolling Stones Brown Sugar.   Even their merch is designed to offend and titillate with sayings like “White Music for Black People” and “I Like It Big and Black” emblazoned in big letters on their tees.  In a sea of sober, overly PC, pop oriented rock bands, Foxy Shazam brings back the raunchy, the decadent, and the absurd that made rock and roll great!  I love them!