Entertainment
February 3, 2018
by That Girl At the Party
0 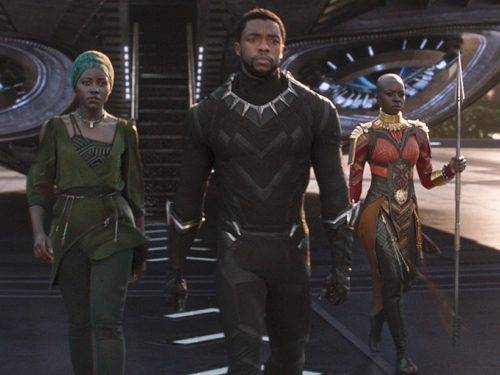 With the Oscars right around the corner, February is, traditionally, a bit of a slow movie month. However, there are still always a couple great must-sees. This year, February is all about Black Panther, the first black superhero in the Marvel Universe, to get his own film. Released during Black History Month, it is the best character developing Marvel film ever and the best black film of all time. Other notables this month are Winchester, which is campy fun with Oscar winner, Helen Mirren and the final film in the hilariously tame BDSM, Fifty Shades dramedy series, Fifty Shades Freed.

Horror and Helen Mirren make for a campy good time. Based on the true life story of Sarah Winchester, heiress to the Winchester fortune, who lived in the most haunted house in the world.

Plot Summary: The most haunted house in the world sits on an isolated stretch of land that’s 50 miles outside of San Francisco. Built by Sarah Winchester, heiress to the Winchester fortune, it stands seven stories tall and contains hundreds of rooms. To an outsider, it looks like a monstrous monument to a disturbed woman’s madness. But Sarah’s actually building a prison, an asylum for hundreds of vengeful ghosts — and the most terrifying among them have a score to settle with the Winchesters.

Plot Summary; Believing they’ve left behind the shadowy figures from the past, billionaire Christian Grey and his new wife, Anastasia, fully embrace their inextricable connection and shared life of luxury. Just as the Greys begin to step into their new roles, sinister events come to light and jeopardize their happy ending before it even begins.

I missed the screening but was alarmed to hear about the food allergy bullying scene. Peter Rabbit is so beloved in my home that I was disappointed to say the least.

Plot Summary: Peter Rabbit and his three sisters — Flopsy, Mopsy and Cotton-Tail — enjoy spending their days in Mr. McGregor’s vegetable garden. When one of McGregor’s relatives suddenly moves in, he’s less than thrilled to discover a family of rabbits in his new home. A battle of wills soon breaks out as the new owner hatches scheme after scheme to get rid of Peter – a resourceful rabbit who proves to be a worthy and wily opponent.

Interesting idea to cast the real people to re-enact this true life story of a terrorist on a Paris train.

Plot Summary: On Aug. 21, 2015, the world watches in stunned silence as the media reports a thwarted terrorist attack on a train that’s bound for Paris — an attempt prevented by three young Americans traveling together through Europe. The heroic and courageous actions of Anthony Sadler, Alek Skarlatos and Spencer Stone help to save the lives of more than 500 passengers on board.

The best character introducing Marvel movie of all time, Black Panther is also the most important Black film ever made! Uplifting, action-packed and poignant, the film addresses the historic key dilemma in black activism against oppression.  It’s the early Malcolm X vs Martin Luther King discourse that still rages today. As we watch police murder black people and the community still struggle in this racist world, should we really keep going high, when they keep going low? Is this really working as a strategy? Or should we meet fire with stronger fire.  Bringing themes of unity, ancestry, and love to this age old discussion while still delivering kick-ass action, this film wins on all counts.

Plot Summary: After the death of his father, T’Challa returns home to the African nation of Wakanda to take his rightful place as king. When a powerful enemy suddenly reappears, T’Challa’s mettle as king — and as Black Panther – gets tested when he’s drawn into a conflict that puts the fate of Wakanda and the entire world at risk. Faced with treachery and danger, the young king must rally his allies and release the full power of Black Panther to defeat his foes and secure the safety of his people.

Fun for the whole family, this animated film is the latest from four time Oscar winning animator, Nick Park and features Oscar-winning actor Eddie Redmayne as the lead voice.

Plot Summary: A plucky cave man named Dug, his sidekick Hognob and the rest of their tribe face a grave threat to their simple existence. Lord Nooth plans to take over their land and transform it into a giant mine, forcing Dug and his clan to dig for precious metals. Not ready to go down without a fight, Dug and Hognob must unite their people in an epic quest to defeat a mighty enemy — the Bronze Age.

From the director of “Ex Machina”,  this looks strange and interesting. The film has been overshadowed by the politics at its studio Paramount, which for some reason have decided to release it to Netflix rather than internationally. I would suggest seeing it in the theaters, as sci-fi plays best on the big screen.

Plot Summary: A biologist searches for her missing husband while on an expedition with a secret agency and discovers a dangerous creature lurking in the wilderness.

Based on the best-selling YA novel, Every Day is a wonderful film about unconditional love and acceptance. It’s a must-see for every age.

Plot Summary: Sixteen-year-old Rhiannon falls in love with A, a mysterious spirit who inhabits a different body every day. Feeling an unmatched connection, Rhiannon and A try to find each other on a daily basis, always unsure of what or who the next day will bring. Soon, the realities of loving someone who is a different person every 24 hours starts to take its toll, leaving Rhiannon and A to face the hardest decision either has ever had to make.

From the producers of “Horrible Bosses”, this is sure to be a blast. Jason Bateman and Rachel McAdams are a perfect comedic coupling.

Plot Summary: Max and Annie’s weekly game night gets kicked up a notch when Max’s brother Brooks arranges a murder mystery party — complete with fake thugs and federal agents. So when Brooks gets kidnapped, it’s all supposed to be part of the game. As the competitors set out to solve the case, they start to learn that neither the game nor Brooks are what they seem to be. The friends soon find themselves in over their heads as each twist leads to another unexpected turn over the course of one chaotic night.

The GOP Tried To Fool America, Twitter Snapped Back #YoMemoJokes