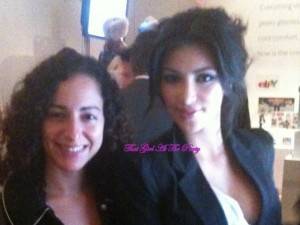 Last night Kim Kardashian hosted a cocktail reception to celebrate eBay‘s new holiday pop-up shop at 3 West 57th, the former home of Phillips auction house, and the home of Fortunoff before that.  There were a ton of events going on within a 2-block radius of this party including the TOMS shoe launch at Bergdorf, the launch of Same Sky, Bracelets at Ana Tzarev Gallery, and the UNICEF Snowflake lighting followed by a reception at Louis Vuitton. And of course, we all know about Diddy‘s party at the Plaza.   So although I try never to venture above 14th Street, it was a midtown party night for me. 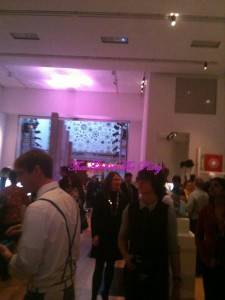 Now the weird thing about eBay’s pop-up shop is that absolutely nothing in the store is for sale.  Seriously, you can’t buy a single thing on display there, even though they have some of the hottest holiday gift items including Beatles Rock Band, the newest Elmo doll and Elmo hands (??), and Nikon SLR cameras.  A bunch of dresses formerly worn by Kim Kardashian herself are also on display and being auctioned off for charity. 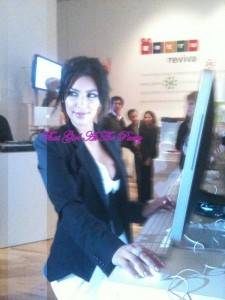 Instead of the traditional “pop-up shop” model, at the eBay store a personal shopper will help you find what you need at one of the many computer kiosks set up around the room. You can then bid on an item or “Buy It Now,” and it will be mailed to your home.  I ask you: what is the point of going to a pop-up shop when I could simply bid on eBay items from the comfort of my own home?  I don’t get it.  In fact, were it not for the open bar and delicious hors d’oeuvres form Creative Edge catering, I wouldn’t have enjoyed this event.  In fact, it was rather dull until Kim showed up and I got a picture with her.  She is actually very attractive in person, and my male friend commented on her nice ass.

Now you would expect eBay, of all companies, to provide a nice gift bag.  But sadly, theirs only had a notebook and scented pencils in it.  I mean, I know we’re in a recession, but come on people!  It’s the holiday season!

Follow @ebay on Twitter or Facebook to find out how you can get a $50 gift certificate.  Hundreds of them are being given out over the next week at their store.