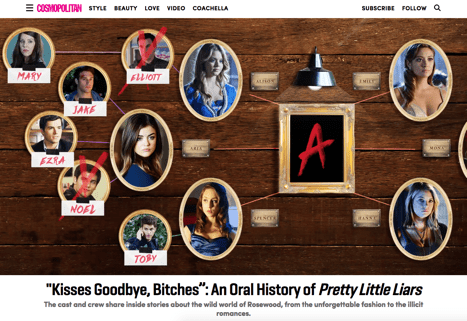 Cosmopolitan.com knows we’re all addicted to “Pretty Little Liars“! So they reached out to me with this fun oral history ahead of tonight’s season premiere of the final season on Freeform. Told by the show’s stars – Lucy Hale, Troian Bellisario, Shay Mitchell, Sasha Pieterse, Ian Harding and Janel Parrish – showrunner Marlene King, costume designer Mandi Line, and former production designer Jakub Durkoth, as well as author of the Pretty Little Liars series Sara Shepard – offer us a behind the scenes look.

Here are some highlights:

Jakub Durkoth (production designer): I created a little box that hung on the wall in the art department. If you asked a logic question, you had to put a dollar in it.

Ian Harding (Ezra Fitz): I love the fact that they’re supposed to be like, “We’re so exhausted; we’re being hunted and harassed, and are vaguely suspicious of the cops due to one thing that happened in the second season…so we’re never going to go to them.”

Janel Parrish (Mona Vanderwaal): We just joked about the fact that every cop that we’ve had on the show has been bad in some way. What the hell, Rosewood?

Lucy Hale (Aria Montgomery): They were always dressed to the nines at school. And always running in the woods in heels.

Troian Bellisario (Spencer Hastings): We live in Pennsylvania, but there’s never been snow except for the Christmas episode.

Harding: I wonder if we secretly paved the way for the Trump administration. Because it’s just about what you want to believe at all times, and ignoring the obvious truths, and people just go with you for seven years on that. There are so many times of like: Go to the police! Don’t make this more difficult than it needs to be! It’s all about misinformation and a complete lack of logic. We just saturated the United States with it. I think we’re secretly to blame for the current president.

Bellisario: I was pretty certain that I wasn’t right for [Spencer]. In my heart I felt in line with her, but in the book, she was a blonde-haired, green-eyed, all-American girl next door. There was no way they were going to cast me. The scene I auditioned with was her sneaking out of dinner with her family to smoke a cigarette with her sister’s fiancée, which ended up not being in the pilot because it was too risqué!

Marlene King (showrunner): Troian came in with no makeup on and delivered a great performance. We were like, “You’ve gotta come in and own it as a Pretty Little Liar.” She came back with her hair and makeup done, very stylish, with this tuxedo jacket on, and tight pants, and does this scene. She turns around and drops the jacket, and is wearing a scoop shirt that goes down all the way down to the small of her back, and whips out the cigarette. It was amazing. I was like, This woman knows who Spencer Hastings is.

Bellisario: Truthfully, I don’t know how to do my own hair and makeup. I was 23 at the time, just out of theater school. I went with the way that I do my makeup—foundation and blush—and straightened my hair. The note back from the network was, “Can you tell her to actually do her hair and her makeup?” And I was like, “…I did.” I spent a long time doing my hair and makeup.

Shay Mitchell (Emily Fields): Originally I’d come in to read for her [Spencer]. When I auditioned for [Emily] and found out I landed it, I read the book on a flight and couldn’t put it down.

King: I think Ashley [Benson] was the last person we cast. By then, we really wanted one of the four original Liars, excluding Alison, to be blonde. We couldn’t find anybody that felt right. Ashley was on a show called Eastwick. It was canceled at 8:00 A.M. on a Monday; the next morning, we had her in our casting offices. She was literally crying in the office because she just found out her show got canceled.

She just popped on TV. She knows how to use those “PLL big eyes,” I call them. We knew we had our Hanna.

On starting the series with Aria, then underage, hooking up with her English teacher:

Hale: I immediately thought [the Ezra/Aria relationship] was super sexy. There is something about a forbidden romance that draws people to it. It had a little Romeo and Juliet vibe at certain points.

Harding: One company dropped its advertising for our show in one of the early seasons, because they didn’t agree with the relationship. And I was like, “No shit, our relationship is illegal!” And Marlene said, “No, it’s not yours, it’s Emily’s relationship.” So I could be seen as a statutory rapist, and people are like, “I know, but love knows no bounds, as long as there is a penis and a vagina involved.”

SEE IT! Trailer And Stills From Star Wars: The Last Jedi

7 Favorite Brands That I Didn't Preview At #OrganicSpa17