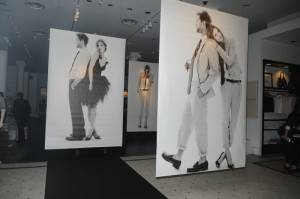 The store was transformed for the event into an evening of cocktails and art—perfect for Stern fans young and old. Floor to ceiling murals from the campaign surrounded guests, Mr. Stern’s original contact sheets were on view, and stacks of his most famous collection of Marilyn Monroe books filled the center of the store.

With over 250 guests in attendance (including a bevy of Victoria Secret models), a bar courtesy of Hendricks Gin, bubbly by Martini & Rossi Prosecco and music by celebrity DJ Angola, Club Monaco and Mr. Stern had much to celebrate.  Bert was the life of the party hosting and toasting his guests until the very end.  “I had a wonderful time. I can’t believe all of these people showed up just for me. What a great night!” says Stern.

Club Monaco’s choice to work with Bert Stern builds on the brand’s history of working with the world’s most renowned photographers including Richard Avedon, Peter Lindbergh, Patrick Demarchelier, Mario Testino, Walter Chin, and Nathaniel Goldberg. The iconic black and white photographs, captured again this season by Mr. Stern, are at the foundation of the Club Monaco brand and continue to exude a timeless and sophisticated style.

How to Channel Marilyn with glominerals