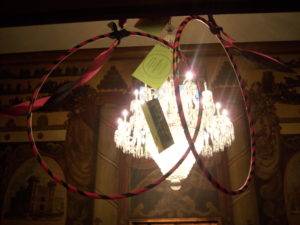 Although hoops have been used as far back as ancient Greece for exercise, this year marks the 51-year anniversary of the Hula Hoop in its current incarnation.  Thus I was delighted to be invited to the HOOPLA! Party to benefit the Merchant House Museum (29 East Fourth Street.). Although yet another rain soaked night in the City (it’s starting to feel like London without the hot British boys!) the event was a whimsical fete.  We frolicked on the roof under tents consuming the punch we had been warned about upon entering.

Entertainment was provided by The Gryonauts Hoop Troupe, three professional hoopsters who were hula hooping marvels!  The crowd was in awe, as one gal laid out on her back and had the hoop swirling speedily around her agile foot!

It was wonderful to be amongst such a sharp crowd.  I met some delightful guests and we conversed about everything from Obama to gay marriage to WWII to the Madoff scandal!  As one gentleman worked in finance, I queried him for his take on the whole Madoff saga and he had an interesting story.  It seems that one associate of his was invited to invest with Madoff but decided against it when he learned that virtually no one ever quit or left the firm.  Another guest cracked me up when she revealed that her wild younger cousin had her best friend’s mom tattoo her in the kitchen!  I mean, how crazy is that?  Where do this cousin and her best friend live that Moms are tattooing kids in their kitchens?  Is this some new craze sweeping through suburbia?!

Located off Washington Square Park, The Merchant House is the only 19th century home preserved completely intact, both inside and out, in New York City.      A visit to the house offers a rare glimpse into what life in the City was like a full hundred and seventy-seven years ago!  It is, of course, also said to have ghosts.  The website has this interesting query  – “if you visit the museum and have an ‘experience’, please let one of the staff know so we can add your story to our growing roster of ghost tales”. Do do do do, Do do do do…. 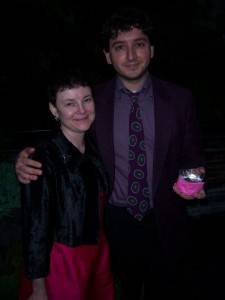