On Your Screen, TGATP Art and Culture, TGATP Screen
April 12, 2013
by That Girl At the Party
0 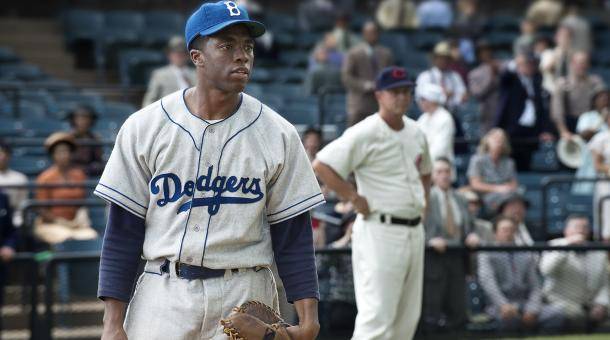 While Brian Helgeland‘s biopic “42″ is an ok movie, for me it lacked one crucial element – the man the film is supposed to be about Jackie Robinson!  I wanted this to be the definitive movie on Robinson’s life but instead walked away with as many questions about him as I came to the theater with. With nothing about his upbringing or background,  I learned very little about him.  I am very disappointed that rather than tell Robinson’s story the film is a whitewash that focuses more on Branch Rickey, the owner who signed him.  While the role is brilliantly played by Harrison Ford, the audience never really gets the greatness that was Jackie Robinson.  Instead, he is portrayed as just a pawn in Rickey’s “great experiment” and a victim of bad White people, who is saved by a good White man, Rickey.  It would be as if “Ray” had focused on Ahmet Ertegun rather than Ray Charles!

In addition, because most of the film is on the ball field or in an office, we never really get a sense of the period.  Jackie Robinson came to baseball in the mid forties, a time of great struggle for African-Americans.  He came twenty years before Martin Luther King and a strong visible, civil rights movement.  The back of the bus was still a reality and men were lynched for showing any sort of pride in themselves including wearing a suit.  My parents, grandparents, and many other relatives lived through this era and it was definitely not the walk in the park, this film depicts.  African-Americans lived in daily fear and had zero rights.  Racist White people didn’t just suddenly realize the error of their ways and become cool as portrayed in this film.  Jackie Robinson feared for his LIFE when he stepped onto that mound.  And he had to fear for himself his wife and children AT ALL TIMES. He endured daily hate mail with attacks on him and his family that included cross burnings.  So when he stepped onto that field, he did so with the courage of David facing Goliath.  His bravery and the bravery of all African-American living the nightmare that was 1940’s America should’ve been the focus.

Despite a thin script, all of the performances are good including newcomer Chadwick Boseman, as Robinson, Nicole Beharie as his wife Rachel, and Christopher Meloni, in a brief turn as the party hardy Dodgers manager.  Some of the roles are too over the top in characterizing the racism of the time including the Phillies’ manager, who calls Robinson every name in the KKK book.  These cartoonish onscreen characterizations of racism are dangerous as they allow people to discount their own prejudices and pawn racism off as a province of the Southern fool.  However, most racism in America was, and is, far more subtle and can be found in some supposedly educated American minds, as well.

I am still hoping that a better Robinson film will be made in the epic vein of “Malcolm X” or “Ray” because Jackie Robinson was too great a Man and a civil rights icon for “42” to be how people, particularly kids, learn about him.  Calling on Spike Lee because Robinson definitely deserves better.

Colorburst Into Spring With Desigual!