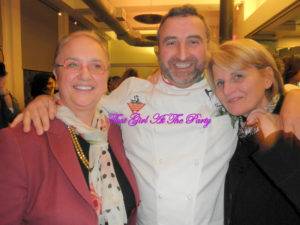 The Italian Culinary Academy held an exclusive two-day event, featuring demos, tastings, and discussions with top Italian chefs and the presentation of the Italian Worldwide awards.  Hosted by the Dean of the Academy and Chef/Partner of Salumeria Rosi, Cesare Casella and Academy Founder, Dorothy Cann Hamilton,  It was an amazing couple of days of great Italian food.  On day one, I sampled a balsamic vinegar that was so delectable that, despite the fact that I use it everyday on salad, it felt like I was tasting it for the first time!  It was simply amazing.  We also were taught the origins of Tuscan wine, and sampled some of Parmacotto’s meats.

The Chef’s Night Out reception was held later that evening and the food was out of this world.  The mushroom risotto was particularly outstanding.  I find it hard to believe that anyone could be as useless as these people are portrayed especially with the wealth of food programming on TV and the internet.  Met Food Network star Anne Burrell and we chatted about her new show “Worst Chefs in America“.   I was also thrilled to meet Lidia Bastianich of “Lydia’s Italy” fame.  Hilariously, the Academy instructors have a still and a camera set up to take before and after photos of people taking shots.  The screwy faces people make after a good stiff one are riotous! A flirty Italian (a bit of an oxymoron there!) was trying to get me to take a shot and a pic with him.   But I have recently sworn off alcohol, so had to decline.  After like, twenty minutes of him trying to pick me up, it turned out that I once dated this dude!  He was highly amused as he knew who I was, but I completely didn’t recognize him, which made for a bit of a “Sex and the City” moment!

To conclude the event, a master class with three-star Michelin Chef Chicco Cerea and his brother Bobo (Da Vittorio, Bergamo, Italy) was held.

To Paris With Love Premiere