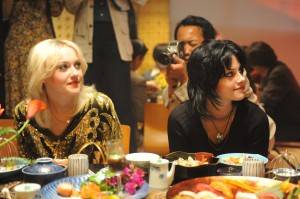 The Runaways is a rock and roll coming of age tale chronicling the short-lived fame of the band through the eyes of its lead singer, Cheri Currie.  Based on Cherie’s book, “Neon Angel”, the whole feel of the film evokes a drive-in movie.  There is so much attention taken to detail in the set design and lighting that it feels as if you are thrust into a time machine and literally transported back to the “70s.  Dakota Fanning, as the 15-year old Cherie, is a revelation and delivers the first Oscar caliber performance of the year  Dakota has definitely come of age and it is often disquieting to see America’s little girl all grown up and portraying a drug addicted promiscuous teen.  As Joan Jett, Kristin Stewart brings a cool hipness to her role that will ignite a zillion girl crushes just like Joan herself did back in the day. Michael Shannon gives the best performance of his career as foul-mouthed manager, Kim Fowley.  I was laughing at his zippy zingers long after they were delivered.

As directed by Fiona Sigismondi, the film is a dark little tale and seems a bit rushed.  It would have been more fun to have more light-hearted, grrl bonding moments and more scenes with them while they were famous.   The Runaways were huge for four years.  Yet the film seems like it all transpires in a matter of months!  There are no real surprises in the plot, as this is the standard story of a band that could’ve been legendary except for the usual internal jealousies that overtake many a great act.

I, unfortunately and inexplicably, didn’t get to attend the NY premiere as I would simply have loved to have met the real Joan and Cherie, who is interestingly, a “chainsaw wood sculptor” now!  But I’m sure our paths will cross another time! 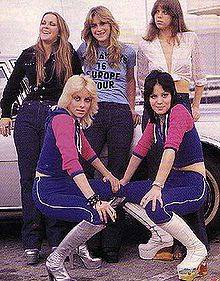 Joan Jett became the first female recording artist to own her own record label in 1980 which she still runs today.  In 2003, Joan was named one of the top 100 Guitarists in Rock by Rolling Stone magazine.  She is one of only two women, the other being Joni Mitchell!  Joan opened eight American shows on the Aerosmith 2007 tour.  As an actress, Joan appeared on multiple TV shows including, “Ellen”, Highlander”, “Law and Order: Criminal Intent”, and most memorably as an ex-CIA agent turned assassin on “Walker Texas Ranger”!   Joan is an ardent supporter of our troops and has toured with the USO for 20 years.  In addition, Joan hosted “Joan Jett’s Radio Revolution”, her own radio show on Steven Van Zandt’s Underground Garage, which aired for 3 years till 2008.  This year, a bio and picture book will be released on Joan’s life to coincide with the film.

Micki Steele, the first bass player of six, went on to be have the greatest commercial success after Jett, as a member of the 80’s hitmmakers the Bangles.  Her killer bass licks can be heard on the major Bangles hit, “Walk Like An Egyptian”.

Cherie Currie is now an art gallery owner in Chatsworth, California and was once married to actor Robert Hays of “Airplane” fame with whom she has a son.

The British-born Lita Ford was managed by Sharon Osbourne after her stint with the Runaways and continues to have musical success.  Despite tons of charted hits, her only Billboard 100 Top 10 hit was “Close My Eyes Forever,” a duet with Ozzy Osbourne.  Lita Ford contributed her likeness and voice to the Xbox 360 and Playstation 3 video game, Brutal Legend. Lita appears as the character “Rima“, alongside Jack Black, Ozzy Osbourne, Tim Curry, Rob Halford of  “Judas Priest” and Lemmy, founding member of  “Motorhead”. “Wicked Wonderland”, Lita’s latest album was released in October 2009.

Bassist Jackie Fox attended Harvard Law School after leaving the band and is an amateur photographer who has photographed famous faces, such as James McAvoy and George Clooney.  Unhappy with the film’s producers, who did not secure her life rights for the film, she has filed litigation.

Vicki Blue, one of six women who had a stint as the Runaways bass player, and Cherie Currie appeared together in Spinal Tap.  Blue, now known as “Victory Tischler-Blue” is a successful producer. In 2003, she formed Sacred Dog Entertainment Group, a film and TV production company that produced the Runaways documentary “Edgeplay”, as well as, numerous other rock docs.  This year, she will launch Desert Seven, a new Internet television network consisting of a diverse line-up of episodic web dramas.