A bad week for Republi-cons as they continue to be as out of touch with the American public as they were two years ago, when they ran that bubblehead, Sarah Palin!  First, the Fourth of July holiday was made a lot less of a happy one by the idiots in the Senate.  Voting along party lines, these dunderheads decided to leave millions of unemployed people without extended UI benefits, while enjoying their second week-long vacation in as many months.  Of course, all but two of  the Republicons ill-advisedly voted “nay.” Do these fools actually think that the millions of people that they left in the lurch are going to vote for them in November?  The current evil Republicon plan seems to be to just say “no” to everything that the Obama administration proposes and hope that the country falls into complete disarray by 2012.  But there’s one little problem; congressional votes have roll calls.  Anyone, with half a brain cell still flaring, will be able to see through their plan!  Following this dumbass move, obvious affirmative action hire and bumbling incompetent, Michael Steele claimed that Afghanistan was “Obama’s war.”  Really?  Obama has only been in for a year and a half; Afghanistan has been going on for nine.  What are Steele and his party going to claim next?  That Obama stole the 2000 and 2004 elections???  I know that the Republicons wanted to portray themselves as “pro-Black folks” since the Democrats have Obama.  But really, can’t they find someone less idiotic than Steele?

While the charges against NY Socialite/Russian Spy, Anna Chapman are quite serious, it was utter bad taste for the NY Post to run an article detailing her sexual pecadillioes!  Why is a woman’s private business always put out in the street like that?  We don’t do this to men!

Had three experiences this month that are indicators of why the American economy is in such decline!  Businesses that are lamenting the loss of customers need only look to the lack of common sense in their customer service and managerial departments!  First off, I had a product that I needed to return to Henri Bendel’s, so I went to their website.  Under the NY store info, it stated “Closed June 13th.” The implication that any logical person would draw from this is that the store had gone out of business on June 13th, so I was surprised when I called the number and someone picked up.  When I mentioned to the customer service rep that the website message was confusing and they might want to change it, she actually stated – get this -“Well, it’s July now”! I’m sorry, but that was one of the dumbest things anyone has ever said to me!  Why was the message still up three weeks later if it was a mere announcement that the store was going to be closed for one day!  It’s still up right now making no sense!  In addition, I love Whole Foods Bowery. But they really need to get their act together in terms of ordering products.  Every week the same items run out.  But for some reason no one over there has figured out to simply order more of the popular items.  This week, no one thought to order extra hot dogs and hot dog and hamburger buns even though it was the Fourth of July!  This is just stupidity on such an epic level that it is boggles the mind how these people stay employed!  The other nightmare situation is T-Mobile‘s customer service.  In the past six weeks, I have spent upwards of 20 hours trying to sort out my phone situation.  Despite being told to go into a store, no one in the stores offers any type of techinical support, which is ridiculous.  Every store should have people that can help folks with the products that they purchase from T-Mobile.  I have now paid for two months of service that I have been unable to use! 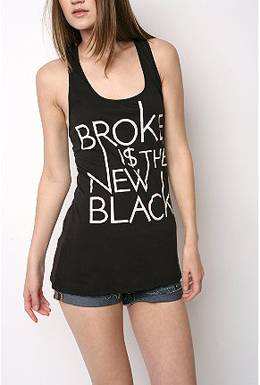 Met a really cool gal named Erin in my neighborhood yesterday.  She was sporting a “Broke is the new Black” tank that just cracked me up.  It’s a fashion must have as it’s the perfect motto for these tough economic times!  She further made me laugh when she said that her credit card had been declined and she had to use cash when she bought it, which made it even more poetic.

Jessica Simpson is rumored to be dating NFL star, Eric Johnson. But what she really needs to consider is dating a Black athlete!  Since she tends towards the lusciously chubby, a Black man would be ideal as they prefer a lil’ meat on the bones they jump!  (Having quit smoking and drinking thus eating more, I am in a chubby stage again and while the white boys have calmed down a bit, the brothers are coming out the woodwork, so I can bear witness to this!)

And finally, is anyone really surprised that Jake and Vienna broke up?  “The Bachelor,” after a gazillion seasons, has yet to produce a couple that stayed together other than Trista and Ryan!  He looks a bit mean but maybe it’s because he reminds me of an ex who was a bit of a prat!  And I bought her story more during the interview.  Jake just seemed mean and distant and blinked like a liar throughout.  While she came off childish, she seemed to be telling the truth and displaying real emotion.