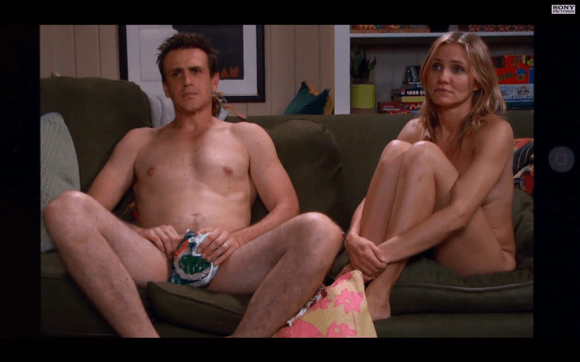 Sex Tape had me laughing my ass off from start to finish!  The saga of Jay (Jason Segel) and Annie (Cameron Diaz) will resonate with most long married couples. When they first meet, the pair can’t keep their hands off each other, with every glance at each other an invitation to copulate.  But, years later, as they face the dual responsibilities of busy work lives and parenting, they can barely find time to even kiss.  To spice it up a bit, they decide to make a sex tape.  All hell breaks loose, when Jay accidentally uploads their 3-hour epic drunken reenactment of the “Joy Of Sex” – (watch for this book to hit the bestsellers list again!) –  to the cloud.

Although there were a few scenes that ran out of steam midway – the Rob Lowe party scene was way too long – all in all, the script was funny.  While not a comic classic, Sex Tape is worth a visit to your multiplex.