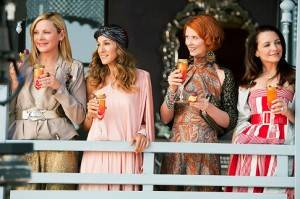 Arriving right when the film started due to A train issues and unable to find my sister, who was my plus one, I settled into a great seat in the balcony for the boisterously fun ride that is always  anything “Sex and the City.”

Unfortunately, this go ’round the writers missed the mark on a number of counts.  The fun thing about Sex in the City in the past was that women actually aspired to emulate the characters.  Even though both the TV show and the movie were always devoid of the rich hues of women that actually make up the female population of NYC and even though it revolves so heavily around a NY lifestyle, every woman envisioned herself a Carrie, a Samantha, a Charlotte, or a Miranda. Some of the more interesting types could even see themselves as a combination of two or more of this lovable lot.   Hell, while some of us just privately felt a kindred spirit to her, some wannabes, like blogger PJ Gach, even go as far as to publicly proclaim themselves “the real Carrie Bradshaws” – this, despite the well-known fact that series creator Candice Bushnell actually based the character on herself.   It is a testament to the great writing during the series that women were simply desperate to be these characters.   And while the first movie gave us more of the characters we loved, this time the ride was a bit less fun with the gals all in the midst of relationship slumps or life chaos.

There were a number of misfires.  First, the once hilarious Samantha, has become too much of a misogynistic gay man’s caricature of a woman.  The beauty of the Samantha character in the past was that she was a highly competent and successful woman in the day, yet a complete freak at night.  It’s why we all loved her.  But now, as opposed to the free spirit and professional woman she once was, she now seems a candidate to join Tiger and Jesse at Pine Grove, when she completely destroys a lucrative business deal for her billionth roll in the hay!  In addition, she totally ignores what the hottie Danish man, who is trying to seduce her, says he likes.  When he clearly states that he enjoys the subtle ways of seduction, she grabs his crotch!  No experienced seductress would ever display behavior that desperate and obvious!  I mean really, how much more dick would she realistically want to experience?  By the time most of us are in our late 30’s, accumulating cash money is a lot more important than more push!  There is no way a woman, who has probably slept with at least a thousand people, would blow a very lucrative business deal for sex with a random, abet very hot stranger, unless she needed psychiatric help!

Secondly, too much time was spent without interactions with the girls and their significant others – Steve and Harry are footnotes and hottie Smith Jared appears and then disappears too rapidly.  Carrie and Big arrive on screen, as the couple we love, but then morph into complete strangers for most of the film!  I just didn’t buy our Carrie as a shrewish nagging wife and Big as a unromantic, couch potato and schlub of an American male!  Their fights didn’t ring true and seemed forced.  It is not until the end of the film , that the Mr. Big we all love re-emerges.  In addition, Sex and the City needs the “THE City” – New York City- to be the central location. The Abu Dhabi segment was way too long and had some cringe inducing, cheesy moments including an awkwardly camp scene with our gals doing karaoke to Helen Reddy’s “I Am Woman,” and another where the Muslim woman all pull out copies of Suzanne Somers menopause tome, Breakthrough. Both scenes fell flat and just didn’t really work.  And please, hire a new lighting person and makeup artist!  The women looked 15 years older than they are as every single line in their faces was badly accentuated by heavily caked on makeup and overly harsh lighting by the existing crew.  My sister speculated that maybe they were trying to portray what women really look like, but I can look in the mirror for that!  Temptu and lighting gels are definitely a must for any future sequels.

All that said, as usual the Patricia Field‘s fashions were amazing!  Like our favorite girlhood baby dolls, the girls seemed to change their clothes for every activity.  And I still laughed out loud at some of the lines and I enjoyed spending a couple hours with my former TV BFFS – for free.  Charlotte is still such a sweetheart with a kind heart, Miranda is, well, Miranda, Samantha is OTT fun in small doses and Carrie, well again, who of us who write NY columns, don’t totally relate to her?  Plus, in the end Big turns out to be a real mensch.   Should there be a “Sex and the City III”, let’s hope they keep it both true to the legacy and set in NYC!

Molly Sims celebrates her 37th birthday with a charitable act