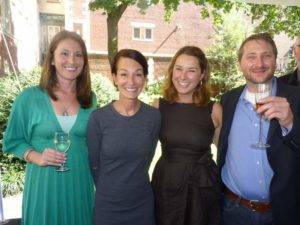 Cynthia Rowley has always been a favorite of TGATP both for her design and her lovely personality.  (I first met her at the premiere of “the September Issue” at the MOMA last year.) Her Spring 2011 line is chock full of must-have pieces for any well dressed woman.  The color combinations were both fresh and airy consisting of muted khakis paired with lovely neutrals. The lines were clean and sophisticated with interesting and unusual extras, like large flat button-like studs.  Rowley’s Spring 2011 show brilliantly evoked the 6o’s and early 70’s, without seeming dated, and the pairing of cutouts with a modern take on studding made for a lovely contrast.

Directly after the breathtaking show, TGATP caught up with Rebecca Romijn for her opinion of the show and she stated, “The show was beautiful, just beautiful.  I loved her updated take on studs.  My favorite piece was the white, diaphanous laser cut dress near the end of the show.” Of her strategy for the Spring 2011 line, Rowley stated that “I tried to think of interesting color mixing and colors that have not been seen together.  I also wanted to explore new ways to show skin and to utilize lots of details, like the cutouts, in a way that would take on a different effect when you stepped further away from it.”

Following her show, a luncheon was held in the gardens of the Cooper-Hewitt Museum to celebrate Rowley’s collaboration with Johnson and Johnson to create an assortment of designer Band-Aids.  An elegant solution to grown-up cuts and scrapes, the Band-Aids feature sequins, lace patterns, and a full Rowley runway show.  Of her inspiration for the Band-Aid designs, Rowley said, “ Working with Band-Aids was a dream come true for me as they are the ultimate in form and function.  Johnson and Johnson were very supportive in every aspect of the creative process from the actual design to the ads and PR effort.  I love to look at everyday necessities in a new way and maybe my Band-Aid designs are something that can add a little Joy to everyday Life.”

The problem I see with the adorable Rowley Band-Aids is that they may lead to an epidemic of people self-cutting just so that they can wear them!  In addition, they are having such a limited edition run, that they I will never want to use them for fear of not being able to replenish my supply!

Best 2017 Holiday Gifts For Him