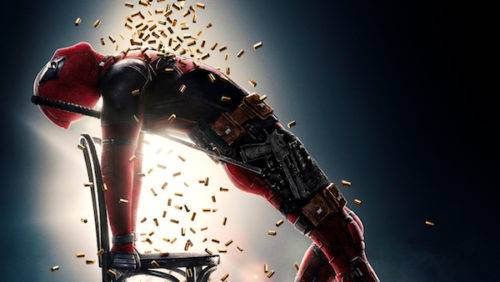 The year is just zipping by! Who can believe it is already summer movie season? This year’s summer slate starts out with a bang with Marvel’s “Deadpool 2”, one of my fav movies of the year so far, the instant grindhouse classic “Revenge”, the very tragic “On Chesil Beach”, Ethan Hawke in his best performance to date, as a pastor, in Paul Schrader’s “First Reformed” and the latest Star Wars spin off, “Solo.”

I love these sort to twisty thrillers and am looking forward to this one. Starring David Tennant, better known as “Barty Crouch Jr.” in the Harry Potter films, this is sure to be a riveting thriller.

Plot Summary: A young valet breaks into a man’s home and discovers a terrified woman who’s chained and gagged. After notifying the police, he soon becomes the target of the psychopath’s wrath as he tries to rescue the victim that he left behind.

I am on the fence about this one as I am such a big fan of the Goldie Hawn/Kurt Russell original. I also feel it was miscast. I would have rather seen this remade as a black film. Imagine Tiffany Haddish and Kevin Hart in this instead of Faris and Derbez.  It would have been much funnier.

Plot Summary: Kate is a single, working-class mother of three who’s hired to clean a luxury yacht that belongs to Leonardo — a selfish, spoiled and wealthy Mexican playboy. After unjustly firing Kate, Leonardo falls off the boat and wakes up with no memory of who he is. To get payback, Kate shows up at the hospital and convinces the confused amnesiac that they’re married. As Leonardo tries to get used to manual labor and his new family, Kate starts to wonder how long she can keep fooling her fake husband.

Because I can watch Charlize in anything and am a big fan of Jason Reitman, who I had the honor to meet when he made “Up In The Air”, I definitely recommend this wonderful film.

Plot Summary: Marlo, a mother of three, is gifted a night nanny by her brother. Hesitant to the extravagance at first, Marlo comes to form a unique bond with the thoughtful, surprising, and sometimes challenging young nanny named Tully.

With all the country is currently going through, Ruth Bader Ginsberg is our savior and a vital member of the Supreme Court. She is a force of nature and this film should be a must-see for very women and girl in America and the world.

Plot Summary: An intimate portrait of an unlikely rock star: Justice Ruth Bader Ginsburg. With unprecedented access, the filmmakers explore how her early legal battles changed the world for women.

One of the best films of the year to date, this is an instant cult classic. It is so kick-ass that I absolutely loved it. Gory, yet action packed, taut and thrilling, Revenge is a must-see. I wanted to jump into the film and get revenge myself  for the crazy fd up things they did to this beautiful woman!

Plot Summary: Jen is enjoying a romantic getaway with her wealthy boyfriend — until his two sleazy friends arrive for an unannounced hunting trip. As tension mounts in the house, the situation abruptly and viciously intensifies, culminating in a shocking act that leaves Jen left for dead. Unfortunately for her assailants, she survives and soon begins a relentless quest for bloody revenge.

Following in the tradition of Halle Berry in last year’s “Kidnap” and just in time for Mother’s Day, Gabrielle Union stars in this year’s “mom kicking ass to protect her children” movie.

Plot Summary: A woman takes her two children on a weekend getaway to her late father’s secluded, high-tech estate in the countryside. She soon finds herself in a desperate fight to save all of their lives when four men break into the house in search of something.

Life Of the Party

I love Melissa McCarthy and never miss her films. Her everywoman persona always strikes the right comedic chords. With Maya Rudolph, as her friend, this is going to be tons of fun.

Plot Summary: Dumped by her husband, longtime housewife Deanna turns regret into reset by going back to college. Winding up at the same school as her daughter, Deanna plunges headlong into the campus experience — embracing the fun, the freedom and the frat boys.

I felt that Margot Robbie was literally robbed this year during Awards season. Her amazing turn as Tonya Harding was totally heartbreaking. This quirky noir finds her in true femme fatale form.

Plot Summary: In the dark heart of a sprawling and anonymous city, two assassins carry out a sinister mission, a teacher battles a fatal illness, an enigmatic janitor and a curious waitress lead a dangerous double life. Murderous consequences unravel in the dead of night as their lives all intertwine at the hands of a mysterious criminal mastermind who is hell-bent on revenge.

Boom For Real: The Late Teenage Years of Jean-Michel Basquiat

Jean-Michel was a star that shown bright from an early age and was gone far, far too soon. This film brings his teen years to life and will also make you long for the vibrant New York of yesteryear.

Plot Summary: Never-before-seen works, writings and photographs offer insight into the life of Jean-Michel Basquiat as a teenager in New York in the late 1970s. The times, the people and the movements of the city help Basquiat form his artistic vision.

The divine casting combination of Saoirse Ronan, Annette Bening, Brian Dennehy and Mare Winningham for this latest cinematic take on Chekkov’ most famous play, makes this a must-see.

Plot Summary: At a picturesque lakeside estate, a love triangle unfolds between the diva Irina, her lover Boris and the ingenue Nina.

I want to see this for Dominic Cooper, who I have always admired as an actor although he just broke my heart when he and Ruth Negga split!

Plot Summary: Tara is a housewife in suburban London who’s raising two young children while married to an overworked, self-absorbed husband. In desperate need of a change, Tara makes the bold decision to leave everything behind and buy a one-way ticket to Paris. Her newfound freedom and journey of self-discovery soon gives way to the realization that walking out on your life isn’t so simple.

The silliest and goofiest of the Marvel superheroes Deadpool 2, is the eleventh installment in the X-Men film series. With the wisecracks flying as fast as the action, this will be the first blockbuster of the summer.

Beautifully acted but heartbreakingly sad, this film struck a personal nerve for me. I was once engaged to a lovely guy, who suffered the same problem as Florence and we split like she and Edward. I also looked him up later and he was married with a little girl. Very, very sad indeed.

Plot Summary: In 1962, newlyweds Edward and Florence, both in their early 20s and also both virgins, spend their honeymoon preoccupied and terrified by the upcoming consummation of their marriage.

Keaton, Fonda, Beergen and Steenburgen in an adult romantic comedy sounds like a great way to spend a Sunday afternoon after brunch. With so few roles for older legendary actresses, I am happy to see this one.

Plot Summary: Diane is recently widowed after 40 years of marriage. Vivian enjoys her men with no strings attached. Sharon is still working through her decades-old divorce. Carol’s marriage is in a slump after 35 years. The lives of these four friends are turned upside down after reading the infamous “50 Shades of Grey.” From discovering new romance to rekindling old flames, they inspire each other to make their next chapter their best chapter yet.

With an all-star cast voicing adorable dogs, this is a perfect film to take your family. If you are single, grab a niece, nephew or friend’s kid and treat them.

Plot Summary: A detective finds adventure with his unlikely partner — a canine cop who has to go under cover at the world’s most exclusive dog show.

Ethan Hawke gives one of the best performances of his career as a pastor dealing with a multitude of uncomfortable earthy situations. A24 has become one of my favorite film companies for their eclectic roster.

Plot Summary: A pastor of a small church in upstate New York starts to spiral out of control after a soul-shaking encounter with an unstable environmental activist and his pregnant wife.

How To Talk To Girls At Parties

Another A24 release, this film is a new kind of teen flick. Can’t wait.

Plot Summary: Young Enn and his best friends stumble upon a bizarre gathering of teenagers who are from another planet, visiting Earth to complete a mysterious rite of passage. That doesn’t stop Enn from falling madly in love with Zan, a beautiful and rebellious alien who becomes fascinated with him. Together, they embark on a delirious adventure through the kinetic, punk rock world of 1970s London, inadvertently setting off a series of events that leads to the ultimate showdown between punks and aliens.

Pope Francis: A Man Of His Word

As a born again Christian this is definitely on my list. However, everyone will enjoy and benefit from a couple hours spent learning about the extraordinary Pope Francis, and his message of peace and love.

Plot Summary: Pope Francis embarks on a personal journey to present his work of reform and answer today’s global questions — from his deep concern for the poor and wealth inequality to his involvement in environmental issues, social justice and calls for peace.

The long awaited Star Wars spin-off that recounts the story of reluctant hero, Hans Solo before he joins the Rebel Alliance. Directed by Ron Howard, we find out how Hans first meets Chewbacca and also learn about his true relationship with Lando Calrissian.

Elle Fanning shines as Mary Shelley in this riveting film covering the story behind  the creation of the horror classic “Frankenstein.” This was one of the best films of the Tribeca Film Fest.

Plot Summary: Mary Wollstonecraft’s family disapproves when she and poet Percy Shelley announce their love for each other. The family is horrified when it finds that the couple has eloped, accompanied by Mary’s half-sister, Claire. While staying in the home of Lord Byron at Lake Geneva, the guests are challenged to write a ghost story, which leads Mary to conceive her novel “Frankenstein.”

The Gospel According To Andre

I am not a big fan of Andre’s as I find the habit of telling beautiful women what to wear while being so ginormous you can only wear tents yourself, a bit hypocritical. That said, the film is an interesting look at a life lived unusually.

Plot Summary: Filmmaker Kate Novack explores the life and career of fashion journalist André Leon Talley — from his childhood in the segregated South to his iconic, barrier-breaking work at Women’s Wear Daily, W and Vogue.