One of the banes of my existence as an editor/influencer for the past 14 years has been the surge of bad PR people. From the overtly racist to the annoyingly idiotic, there are now dozens of people, who have hung out the PR shingle with no idea what the term “public relations” means let alone best PR practices. There is no way these faux PR people should be allowed to rep clients. Today’s events were so ridiculous that these so-called PR women and the restaurant owner that retained them deserve business Darwin Awards. Here is the skinny:

On January 6th, I received this unsolicited email message inviting me to review Canto, a new restaurant in the West Village. 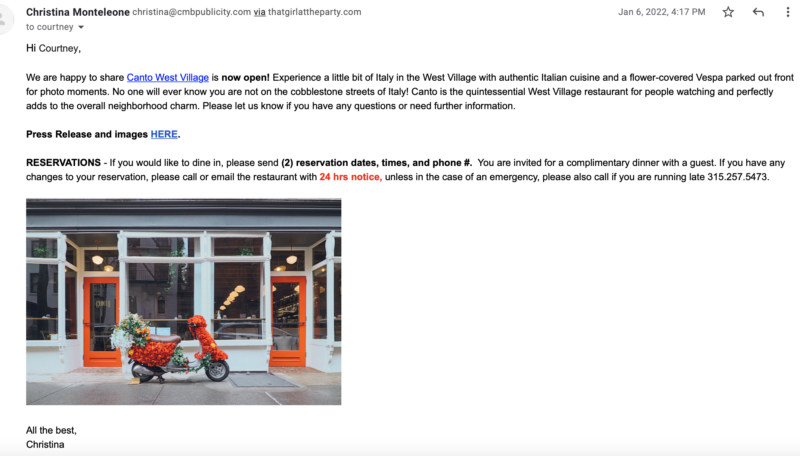 With Covid_19 still surging in NYC — the West Village had some of the highest incidences at the time I was invited — I wasn’t sure I wanted to dine-in anywhere. So it was a couple of weeks before I decided to take her up on her offer. I got back to her with the requested 2 dates and times for the “complimentary meal” that she offered on behalf of her client. She then, inexplicably, sent the following email:

Now I am sorry but who, with any level of PR and Marketing competency, does this sort of bait and switch?? She contacted me not vice-versa. I originally didn’t really care because, again, I am not really going to restaurants right now. But then, I heard from another influencer that she had done this bait and switch to a bunch of other editors/influencers/and bloggers. So I called the number she provided expecting to speak to her. Instead, the owner of the restaurant picked up the phone. When I explained to him the situation with his hapless PR, he offered me the comp meal that she was all over town offering people then reneging on. I accepted. But because it was not really about the meal, l let him know that this was bad protocol on behalf of his PR. He then said he was going to speak to her but would see me on the Sunday I had just reserved. The business owner seemed to have more sense than his PR person. So imagine my surprise when a couple of hours later, I received yet another ridiculous and unprofessional missive from yet another daffy and incompetent PR person, aligned with this restaurant:

I am only recounting this story to illustrate the type of crazy and ridiculous mediocrity that is passing itself off as “PR” in NYC and the now total lack of professionalism in this and other hospitality-related fields. The sheer gall of inviting people to a “complimentary meal” then reneging and somehow blaming them is just the stupidest PR stunt I have ever seen. I, at no time, reached out to these people or requested a “comp meal”. They contacted me.

This basically amounted to a PR phishing scam. Did they really think that this bait and switch was going to be good for their client’s restaurant or their own reputations as PR people? Did she really think editors were going to be like “Let me go pay to eat at some random restaurant then put in the work to review and promote it” after this rude behavior? What would be in that for the editors/influencers? And who the hell blames total strangers, whose time they have wasted, for their own mistakes?

I have done PR on and off for 20+ years. If the client had changed his mind about comping meals after I had already invited media to come in for free, I would have advised him against it or come out of pocket myself. Or I would have apologized to the people I invited instead of trying to twist the story around and guilt them for taking me up on my offer.

The PR person is the very face of the company. A sense of accountability and the ability to determine what is, and is not, a good move on behalf of clients is a basic PR job requirement. Anyone, who lacks that core ability, should in no way be repping people as PR. The proper protocol for handling the rescinding of invites would have been to simply apologize, not blame the media they invited and try to somehow guilt us. Out of curiosity, I checked out the credentials of the woman, who initially invited me, on LinkedIn. She has only been in business/”self-employed” for 4 months, which explains a lot. It is literally the blind leading the blind with this PR and the owner of Canto. However, one would expect far more from anyone that is claiming to be the “Founder” of a “media consulting” firm,  particularly because she has worked at bigger PR agencies.

And as I thought about this whole incident, it got me thinking about the bigger picture of where we are as a country right now. Frankly, it’s not a good place. We have a nation of “Christines” and “Ginas”, who lack the ability to take responsibility for their own mistakes and correct them with gracious humility. And even, more frightening, we have a nation of self-obsessed people, who are projecting blame on other people, for those mistakes. While we were once world leaders in business innovation, hospitality, and customer service, we are now like a third-world country! In addition, far too many people are starting businesses without the requisite experience and social skills. Inexperienced unskilled business owners, who lack smarts, accountability, or grace while projecting blame for those deficiencies, is why we, as a country, are in the bad condition we are in.

I also feel that the proliferation of passive-aggressive abuse of strangers explains how we ended up with a con man and fool, like Trump, in our White House. As we experienced through the nightmare of four years under his narcissistic tyranny — which started with racist dog-whistling and ended with a failed coup — America is populated with millions of gaslighters, who do crazy wrong things then project the blame on to their victims. It places all of us in a weird Twilight Zone-like existence whereby absolute strangers are abusing us then trying to blame us for their abuse. You, now, never know when a stranger, like Christine or Gina, is going to enter your world and abuse you then blame you for the abuse. It is karening on a somewhat higher level, since it lacks the racist component. But it is karening, nonetheless. It is also, quite frankly, both annoying and scary to experience.

Needless to say, I will not be dining at Canto West Village. I give the place a year in business if these are the sort of kooky people they hire to handle their PR — the most important part of any business.

5 Questions to Ask Yourself Before Getting Braces