Dispatches From The Occupation, Opinion
September 28, 2018
by That Girl At the Party
0 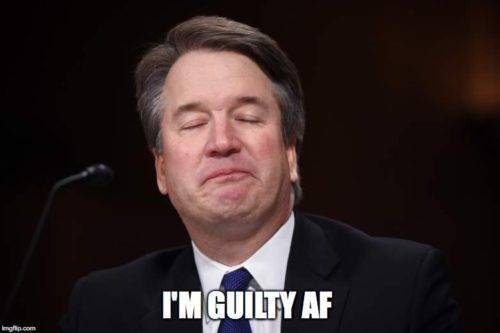 The ridiculous charade that is transpiring around the confirmation of the sexual assaulter and alcoholic Brett Kavanaugh to the Supreme Court is a continuance of the embarrassing Trump shit show that has been playing out in America for the last couple of years. From a bullying, narcissistic, Russian puppet in our White House comes the most unpopular and unfit individual ever nominated to the Supreme Court. Brett Kavanaugh is a sexual assaulting baby man, who during his testimony, proved he is in no way fit to serve on any bench, let alone the highest court in the land.

His sniveling, combative, lip quivering, yelling, whining, weepy testimony displayed a man who is clearly mentally unstable. He engaged in behavior that was inappropriate and would be a disqualifier for any other American applying for a job. Imagine if Dr. Ford had been as combative or weeping throughout her testimony. Everyone would be saying she was mentally unstable. It is completely ludicrous that the GOP would continue with his confirmation.

On top of all the other odd behavior and tics, Kavanaugh mentioned his love of beer multiple times. He arrogantly pulled the classic alcoholic trick of trying to deflect from the topic of his own clear alcoholism by asking multiple senators about their drinking habits! Can anyone imagine mentioning your “love of beer”, asking your potential employer about his or her drinking habits and crying and yelling through a job interview and still getting that job? Fake President Cray Cray has destroyed the entire nation with these inept nominees and placements. The path of destruction left by this idiot is going to take a lifetime to rebuild if Kavanaugh is allowed onto our Supreme Court. He will wreak havoc on civil rights, voting rights, women’s rights, LGBQT rights, children’s rights, and immigrant rights. His placement on the court would be the final nail in the coffin of our dying democracy.

As a survivor of multiple sexual assaults, I am appalled that the GOP is basically giving the middle finger to all survivors and saying that we do not matter. Shame on all of them. How are any of these people going to be able to look their daughters, wives, sisters or any other female in their lives in the eye again.

Yes, Kavanaugh you ARE evil and everyone that is supporting you is indeed “complicit in evil”. We see you. We will not allow you to get away with lying to Congress multiple times, including about the sexual assaults you committed and your alcohol use. Even if the GOP manages to ram you through, we will continue to investigate your assaults . You will NOT get away with this. And neither will the disgusting Lindsay Graham, Orrin Hatch and odious Ted Cruz.

October 17th Head Over To Woodpecker By Burke for $5.00 Pasta!