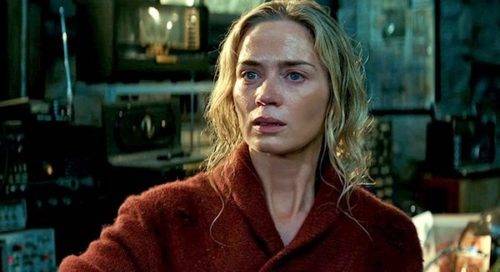 With the truly terrifying “A Quiet Place”, the hilarious “Blockers” and a quirky indie called “The Endless” capped off by the latest Marvel film “Avengers: Infinity War”, this April is an unusually active month.  See all of the aforementioned this month.

“A Quiet Place” is an instant horror classic. I was on the edge of my seat throughout. The alien franchise for a new era, it’s pure genius. Imagine having to give birth in silence while an alien creature is preying on you. Imagine having to keep a newborn quiet. This film was inventive and a new take on the alien invasion genre.

Plot Summary: A family of four must remain silent in its isolated farmhouse to avoid mysterious alien creatures that use sound to hunt their prey.

Despite a somewhat squeamish premise of parents being overly concerned with their teen kids’ sex lives, this film is a riotous great time. Leslie Mann is always funny and I have grown to love John Cena. The film hits all the right notes on parenting teens in the era of Tinder. I also loved that one of the parents, the mom played by Geraldine Viswanathan  was the voice of reason, who basically says what many of us in the audience are thinking.

Plot Summary: Julie, Kayla and Sam are three high school seniors who make a pact to lose their virginity on prom night. Lisa, Mitchell and Hunter are three overprotective parents who flip out when they find out about their daughters’ plans. They soon join forces for a wild and chaotic quest to stop the girls from sealing the deal — no matter what the cost.

Who doesn’t adore these beautiful animals? Narrated by Kristin Bell, this IMAX documentary thrusts us into the world of baby pandas and the researchers that are saving the species.

Plot Summary: At Chengdu Panda Base in China, scientists are dedicated to protecting the species by breeding adult Giant Pandas in order to introduce cubs into the wild. This film follows one such researcher, whose passion leads her to initiate a new technique inspired by a black bear program in rural New Hampshire. What starts as a cross-culture collaboration becomes a life-changing journey for an American biologist who crosses an ocean to join her; a scientist from Inner Mongolia; and a very curious female cub named Qian Qian, born in captivity.

The Endless was a weird, odd  film. It’s what I call a SWP (stupid white people) film though. Because who would escape a death cult as a teen then go back ten years later just to see how folks are doing? Certainly, no people of color would ever do so! Once you get past that bad decision by the two hipster brothers, it’s a quirky strange mash-up of cult thriller meets sci-fi. I have zero idea why one critic is quoted in the trailer as comparing this to “The Babadook” and “It Follows”, neither of which have any relevance to this awesome film.

Plot Summary: Two brothers receive a cryptic video message inspiring them to revisit the UFO death cult they escaped a decade earlier. Hoping to find the closure that they couldn’t find as young men, they’re forced to reconsider the cult’s beliefs when confronted with unexplainable phenomena surrounding the camp. As the members prepare for the coming of a mysterious event, the brothers race to unravel the seemingly impossible truth before their lives become permanently entangled with the cult.

With an all-star cast including Pierce Brosnan, Guy Pierce and Minnie Driver, this looks to be a great twisty thriller that  I will definitely see. I am surprised there has not been more media push around this one as the trailer looks really interesting.

Plot Summary: Evan Birch is a family man and esteemed professor at a distinguished college, where his charm and reputation have made his philosophy class very popular. When a female student named Joyce goes missing, Evan’s previous off-campus dalliances make his wife question his alibi. Gruff police Detective Malloy has even more reason to be suspicious when crucial evidence makes Evan the prime suspect in her disappearance.

Because we can watch Jon Hamm just breathe, Beirut is a must-see!

Plot Summary: A U.S. diplomat flees Lebanon in 1972 after a tragic incident at his home. Ten years later, he is called back to war-torn Beirut by CIA operatives to negotiate for the life of a friend he left behind.

I love a great teen scare, but “Truth or Dare” is silly and a bit scattered.  There are not enough jump scares or clever kills and there should have been a much-needed rewrite before filming. Not on par with the usual clever Blumhouse fare, like “Happy Death Day” and “The Purge”, it’s just full-on cheesy. It’s a horror without any real scares.

Plot Summary: A seemingly harmless game of truth or dare turns deadly when someone — or something — begins to punish those who tell a lie or refuse a dare.

A fresh take on “King Kong”, this film will be tough for me as I love all animals and know I will be rooting for George.  I see everything with The Rock (yes, I even endured the dreadful “Baywatch”!) so plan to make this a Sunday afternoon outing.

Plot Summary: Primatologist Davis Okoye shares an unshakable bond with George, an extraordinarily intelligent, silverback gorilla that’s been in his care since birth. When a rogue genetic experiment goes wrong, it causes George, a wolf and a reptile to grow to a monstrous size. As the mutated beasts embark on a path of destruction, Okoye teams up with a discredited genetic engineer and the military to secure an antidote and prevent a global catastrophe.

THE must-see film of the month finds the Avengers all together for one action-packed helluva ride. On the heels of the amazing success of “Black Panther”, I can’t wait. Now if we could only have that Black Widow film!

Plot Summary: Iron Man, Thor, the Hulk and the rest of the Avengers unite to battle their most powerful enemy yet — the evil Thanos. On a mission to collect all six Infinity Stones, Thanos plans to use the artifacts to inflict his twisted will on reality. The fate of the planet and existence itself has never been more uncertain as everything the Avengers have fought for has led up to this moment.

I find the growing feminist critique of Amy Schumer‘s new film ridiculous. Yes, we should all feel great about ourselves as we physically are. That has always been true. However, the reality still remains that there is a societal standard of who is and is not “beautiful” and looks are a very important factor to success in society. Sure we are changing, especially when it comes to weight and diversity. But we are still not totally there yet. This film, which is basically saying “you are only as beautiful as you think you are”, looks fun. I will update my review when I see it this week.

Plot Summary: An ordinary woman who struggles with feelings of insecurity and inadequacy on a daily basis wakes from a fall believing she is suddenly the most beautiful and capable woman on the planet. With this newfound confidence, she is empowered to live her life fearlessly and flawlessly, but what will happen when she realizes her appearance never changed?

With an all-star cast of Omar Epps and Paula Patton and Laz Alonzo, I wanted this to be much better than it is.  A straight forward story of kidnapping and sexual trafficking, the film lacks kick-ass and suspense. It is not a thriller, it is my first SBP (Stupid Black Folks) film. I’m sorry but if you are a black person in the middle of country nowhere and you get accosted by some tough hillbilly yokels before you even get to your cabin, wouldn’t you turn around and go home? The premise is unbelievable. And Laz Alonso is so annoying as Omar’s supposed friend, the whole audience wants to off him! This film also needs more interesting subplots. The only twist that does exist is too obvious from the start. A subplot with Alonzo’s character goes nowhere and is a wasted opportunity. This would have been a far better film if it had either been a “Straw Dogs” type movie or a revenge thriller in the vein of “I Spit On Your Grave”. It is neither. I am so disappointed.

Plot Summary: Brea and John embark on a romantic weekend getaway to an isolated estate in the mountains. They are pleasantly surprised when two of their friends, Darren and Malia, also show up unexpectedly. Their plans for fun soon give way to terror when members of a violent biker gang invade the peaceful countryside. Banded together, they now find themselves in a fight for their lives as their assailants will stop at nothing to protect their secrets from the outside world.

Marimekko For Uniqlo Is Simply Adorable