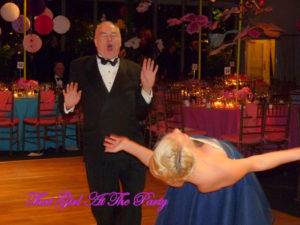 Many, many moons ago, I fell in Love with the American Ballet Theater (and developed a mad crush on Mikhail Baryshnikov!) after seeing the movie, “The Turning Point“!  My love for the company (and my Baryshnikov crush) continues to this day, so I was honored to be invited to the company’s 70th Anniversary Gala Opening Night at the Metropolitan Opera House.

The evening was simply perfect with a performance of highlights from the 2010 season and a late evening dinner in the Tent at Lincoln Center.

I was alternatively breathless, teary-eyed and/or covered with goosebumps throughout!  The dancers were like earth angels, alternatively fluttering, bounding, and spinning across the stage.  My favorite piece was the highly sensual “Lady of the Camelias“ which, as choreographed by John Neumeier and danced by ABT stars, Julie Kent and Roberto Bolle, was one of the most passionate dance performances I have ever experienced. It left me literally speechless.  It is the must see of this season!  In addition to the amazing performances, I made a wonderful new friend in the guest seated next to me, who had hilariously heartfelt commentary between each dance.

Following a three-course meal of tomato tarte and chicken with spinach, gnoochi and mushrooms followed a dessert consisting of three tiny dark chocolate cake variations with homemade ice cream, the guests tripped the night fantastic with naturally, a lot of dancing. The always fabulous Susan Fales-Hill led the crowd in the electric slide and a conga line and the entire room seemed to erupt into a spontaneous boogie!

About the American Ballet Theatre

Founded in 1939, with a mission to develop a repertoire of the best ballets fro the past and to encourage the creation of new works by gifted young choreographer, the American Ballet Theatre is one of the greatest dance companies in the world.  Under the direction of Lucia Chase and Oliver Smith from 1940 to 1980, the Company more than fulfilled that aim. The repertoire, perhaps unmatched in the history of ballet, includes all of the great full-length ballets of the nineteenth century, such as Swan Lake, The Sleeping Beauty and Giselle, the finest works from the early part of this century, such as Apollo, Les Sylphides, Jardin aux Lilas and Rodeo, and acclaimed contemporary masterpieces such as Airs, Push Comes to Shove and Duets. In acquiring such an extraordinary repertoire, ABT has commissioned works by all of the great choreographic geniuses of the 20th century: George Balanchine, Antony Tudor, Jerome Robbins, Agnes de Mille and Twyla Tharp, among others.

In 1980, Mikhail Baryshnikov became Artistic Director of American Ballet Theatre, succeeding Lucia Chase and Oliver Smith. Under his leadership, numerous classical ballets were staged, restaged and refurbished, and the Company experienced a strengthening and refining of the classical tradition. In 1990, Jane Hermann and Oliver Smith succeeded Mr. Baryshnikov and immediately established an agenda that was dedicated to maintaining the great traditions of the past while aggressively pursuing a vital and innovative future.

In keeping with the Company’s long-standing commitment to bringing the finest in dance to the widest international audience, ABT has recently enjoyed triumphant successes with engagements in Tokyo, London, Paris, Madrid, Buenos Aires, Mexico City, Palermo, Italy, and in Athens and Thessaloniki, Greece.

In the Fall of 2000, American Ballet Theatre made its first visit to China, appearing in both Shanghai and Hong Kong. The Company also appeared in Taipei and Singapore for the first time. Over its 60-year history, the Company has appeared in a total of 126 cities in 42 countries. ABT has also appeared in all 50 states of the United States.

In October 1992, former American Ballet Theatre Principal Dancer Kevin McKenzie was appointed Artistic Director. Mr. McKenzie, steadfast in his vision of ABT as “American,” is committed to maintaining the Company’s vast repertoire, and to bringing the magic of dance theater to the great stages of the world.”

TGATP has HealthMaster prepared dinner and chats with Montel Williams