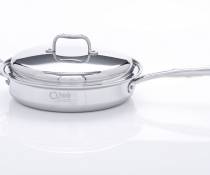 360 Cookware has a very special deal for this Mother’s Day!  Buy your Mom a pot and get a special gift of your own!  When you purchase and ship a 3.5 Quart Sauté Pan to your Mom, you’ll receive an email coupon for a FREE 1 Quart Saucepan for yourself!  These two items are 360’s most versatile pieces.  Experience one-skillet meals in the 3.5 Quart Sauté Pan that makes clean-up a breeze.  The 1 Quart Saucepan is 360’s signature piece and it’s the best choice to “get-to-know” 360 Cookware.  This offer is a Win-Win for you and Mom so ACT NOW!

TGATP was introduced to the ease and   of vapor cooking by the people at 360 Cookware and I love it  We tried out the Skillet Lasagna recipe and it was a breeze to make, really yummy, and best of all, there is no big mess to clean!  Here is the recipe and a video so you can make it for your Mom this Mother’s Day.

(reprinted from the 360 Cookware site)

Heat the 3.5 Quart Sauté Pan over medium heat until it’s hot enough that water beads across the surface, about 2 minutes.

Add the ground beef, onion, and oregano to the hot, dry skillet and season with salt and pepper.  Cook, breaking up the meat with a spoon, until it’s just cooked through, but still very pink. (It will continue to cook in the sauce.) Drain off the fat.

Stir in the pasta sauce and season with salt and pepper if needed. Remove all but a one-quarter of the sauce from the pan and set aside.

Cover and cook over medium heat until steam just begins to escape from under the lid.

Spin the lid to engage the vapor seal then immediately reduce the heat to low. Cook for 40 to 50 minutes until the noodles are tender when pierced with the tip of a small knife.

(Give the lid a spin after about 10 minutes. If it spins easily, leave it alone until it’s done. If not, increase the heat to re-engage the water seal then reduce the heat to medium-low and continue cooking as directed.)

Remove the pan from the heat and let rest for about 10 minutes. Serve.

360 Cooking Tip
Turn this into a vegetarian lasagna by swapping the meat for sautéed spinach or sautéed wild mushrooms: Sauté 11- to 14-ounces of baby spinach, or 20- to 24-ounces sliced assorted mushrooms (we like the combination of shiitake and cremini) in olive oil and garlic. Drain off any liquid, and season with salt and pepper. Proceed with the recipe as directed. Or skip the embellishments altogether and make it classic tomato and cheese lasagna.

Via Spiga for Spring/Summer 2011