The event, which brought together influential moms and media, featured a panel discussion recorded for SiriusXM with influential mothers in media and business. The episode taped during the event will air Monday, May 4, 2015 at 8:00 PM Eastern, 7:00 PM Central and 5:00 PM Pacific Standard Time. 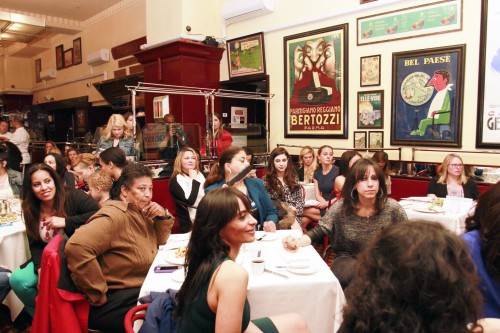 Guests were treated to bites from French bistro Artisanal Fromagerie’s menu, which features enticing options such as Croque Monsieur Madame with ham, gruyere and egg and Lobster Roll with a butter brioche, fresh leaves and fries.

Following brunch, the first panel discussion was moderated by Melissa Gerstein and included Cozy Friedman, Amy Newmark, Lisa Sharkey and Maureen Sullivan. For Friedman, motherhood has led to her taking SoCozy brand of child hair salons into a haircare product line, which recently became available nationally and soon on HSN. Amy Newmark discussed leaving Wall Street after purchasing the “Chicken Soup for the Soul” brand because she felt the need to pursue a passion, and one of her lifelong passions is books.

In a similar vein, Lisa Sharkey became the SVP of Harper-Collins after decades in the broadcast journalism business. She wanted to be there for important milestones in her children’s’ lives, but instead was working late nights and early mornings in the newsroom. Maureen Sullivan, President of AOL, has two young sons of her own and took in all of the fellow panelists advice as she said, “no one has the perfect guidebook on doing this.” 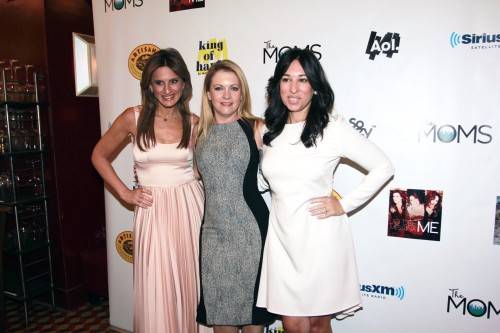 Denise Albert led the second panel discussion featuring Amber Sabathia, Regina Calcatterra, Liliana Gil Valletta and Shelley Ross. After following her husband’s baseball career across the country, Sabathia said had wanted to follow her own path, which led to her founding the clothing line CCandy sharing, “Follow your dreams and do what makes you happy.” Regina Calcatterra, author of the book “Etched In Sand” shared her story of survival in an abusive home and in the foster care system alongside her four siblings. Liliana Gil Valetta, Founder of the XLA Alliance and mother of a young son and pregnant with her second, came to the United States from Colombia as a student when she was 17-years-old in pursuit of the American Dream and now runs a company with 50 employees. Shelley Ross, President of the Cure Alliance and Former EP of Good Morning America, believed in hiring mom’s for senior positions within the newsroom because they provide the most approachable way to deliver news to fellow mothers watching the broadcast.

The final part of the broadcast was a panel moderated by both Melissa Gerstein and Denise Albert featuring panelists Actress and King of Harts Founder Melissa Joan Hart, Orange Is The New Black Actress and Producer Alysia Reiner and Country Music Star Jo Dee Messina. Hart, a mother of three boys, shared that she started her clothing line after being unhappy with the selection of clothes available for boys and desire to do something outside acting, “I wanted to find something continuous. Something where I can go to the office 9 to 5 and then go home and be done,” she shared.

Alysia Reiner recently started her own production company Broad Street Pictures, which begins filming its first movie, about women on Wall Street, in July. Reiner shared that when she told her two-year-old daughter about the long hours she was about to face, expecting her to say she was going to miss her mom and would want her home, and her daughter said she was proud of her. Joe Dee Messina shared that her family travels on tour together to ensure she spends as much time with them as possible and books all concerts around her kids’ school holidays. Following the conclusion of the panel, Dee Messina performed the song “Me” from her new album of the same title available now, which is about all of the aspects of life one has to juggle once they become a mother.