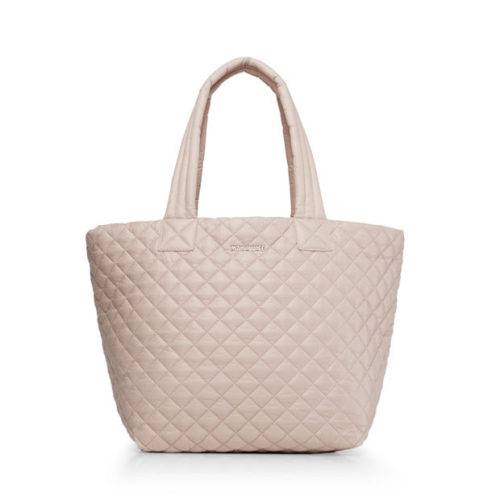 I stopped by the MZ Wallace store last week to check out their collaboration with fitness goddess, Taryn Toomey, who is the Founder of the innovative fitness method, The Class. Over breakfast drinks from Pressed Juicery  – (who would guess that the yummy Strawberry flavored would have the least sugar?) – I fell in love with Toomey’s limiteds edition, exclusive rose quartz colored, Metro Tote. I am also mad jonesing for the classic MZ Wallace Kate bag, as well, as some of their other super cute offerings.

The Toomey collaboration came out of Taryn’s love for the best-selling Metro Tote, which she discovered in 2016. The tote immediately became her everyday go-to bag. “Collaborating with Taryn on this exclusive Metro Tote allowed us to translate our shared appreciation for fitness, wellness and functional style into something special.” says  MZ Wallace Co-Founder, Lucy Wallace Eustice, “We love that Taryn has been using the Metro Tote since she started The Class and were excited to be able to create something unique with her.”

The Class by Taryn Toomey Metro Tote is made of MZ Wallace’s signature Oxford Nylon, which is extremely lightweight, durable and water-resistant. The bag is customized in Taryn’s signature color, a dusty and airy, soft-hued Rose Quartz. To inspire and uplift, Toomey’s Metro Tote also features a mindful mantra from Taryn printed on the inside pocket. The ultimate carryall for your fitness gear and more, The Class by Taryn Toomey Metro Tote will help you reach your 2018 health and wellness goals in style. With a bag this adorable, you’ll actually want to go to the gym!

“The lightweight Metro Tote is one of the most versatile totes I have ever found. It really is the perfect everyday bag for a traveling mother, teacher, student, friend…all of the above and more.” I am thrilled to now have it in one of my signature colors.” says Taryn Toomey.

The Class By Taryn Toomey Metro Tote is available at all MZ Wallace stores, Taryn’s Tribeca Studio, and online at mzwallace.com or taryntoomey.com for $215 US dollars.

Give Your Mom TellTale This Mother’s Day!