Since the opening of The Titanosaur—a massive cast of a 122-foot-long sauropod discovered in Patagonia, Argentina, and the only cast of this species on view in the world—record numbers of visitors have come to see what has become one of the most sought-out icons at the American Museum of Natural History, along with the blue whale and Tyrannosaurus rex.

This month, five gigantic titanosaur fossils that have been on display with The Titanosaur in the Miriam and Ira D. Wallach Orientation Center are coming off view. In their place, building on the immense popularity of The Titanosaur, the Museum will exhibit never-before-displayed specimens drawn from its extensive paleontology collection.

These dozens of sauropod fossil bones will go on view beginning THIS FRIDAY February 17, along with elements of the very first dinosaur fossil collected by the Museum 120 years ago. Most of these fossils are from the Museum’s legendary Big Bone Room, where fossils of sauropods and other large dinosars are stored on open shelving. 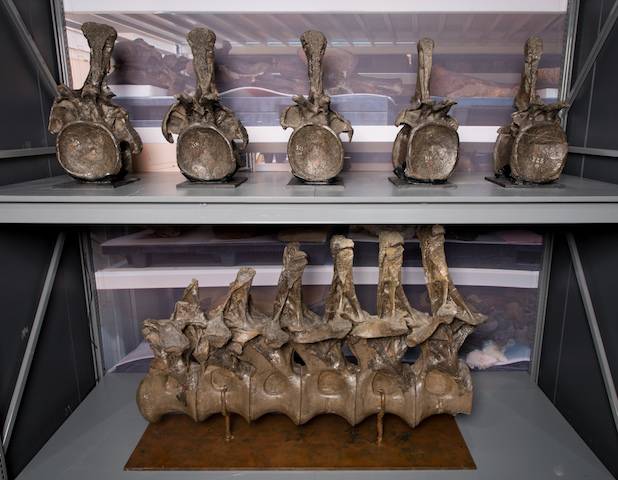 The early fossil find—an incomplete skeleton of the long-necked, plant-eating dinosaur Diplodocus longus—was unearthed by legendary Museum dinosaur hunter Barnum Brown along with Henry Fairfield Osborn in 1897 at Como Bluff, Wyoming. Brown, then 24 and at the start of his career, was on an expedition in search of ancient mammals, but his discovery launched the Museum’s dinosaur collection. Since then, the Museum has sent paleontologists to every continent in search of traces of ancient life, continuing to build this invaluable fossil library. Museum scientists also use the latest technology to ask fresh questions of catalogued specimens. New discoveries are made every year, both in the field and in the existing collection, one of the most comprehensive in the world with more than half a million vertebrate fossils.

In addition to the Diplodocus longus pelvis and femur, fossils going on view include over thirty sauropod vertebrae, representing several different species from the late Jurassic Period (about 150 million years ago) and from several parts of the body, including neck, back, and tail; and a neck and skull from a juvenile Kaatedocus siberi. An accompanying slideshow will feature photographs from Museum expeditions from the 1890s to the present day, spanning field sites from the American West to the Gobi Desert in Mongolia.

The Titanosaur was created over six months by Research Casting International in Ontario, Canada, in association with the Argentina’s Museo Paleontológico Egidio Feruglio, is based on 84 fossil bones that were excavated in Argentine Patagonia in 2014 that were 3D- scanned. In total, scientists have discovered 223 fossil bones from six individuals at the site. The finds included a colossal 8-foot femur, or thigh bone, whose unique shape and size indicated to scientists that they discovered a new species—and one of the biggest dinosaurs ever found.

The Museum’s Division of Paleontology is home to one of the largest and most diverse collections of its kind in the world, with more than 5 million specimens, including more than 4 million fossil invertebrates and more than half a million fossil vertebrates, gathered over more than a century of expeditions. Expeditions continue today with annual fieldwork in some of the richest fossil localities in the world. Since 1990, Michael Novacek, now the Museum’s senior vice president and provost for science, and Mark Norell, Macaulay Curator in the Division of Paleontology and the division’s chair, have led annual expeditions to the Gobi Desert with colleagues from the Mongolian Academy of Sciences, yielding spectacular discoveries of dinosaur, bird, and mammal fossils.

Generous support for The Titanosaur has been provided by the Susan S. and Kenneth L. Wallach Foundation.

The AMNH-Mongolian Academy of Sciences expeditions are generously supported by the Margaret and Will Hearst Paleontological Research Fund.

Founded in 1869, The American Museum of Natural History is one of the world’s preeminent scientific, educational, and cultural institutions. The Museum encompasses 45 permanent exhibition halls, including those in the Rose Center for Earth and Space and the Hayden Planetarium, as well as galleries for temporary exhibitions. It is home to New York State’s official memorial to Theodore Roosevelt, a tribute to Roosevelt’s enduring legacy of environmental conservation. The Museum’s approximately 200 scientists draw on a world-class research collection of more than 33 million artifacts and specimens, some of which are billions of years old, and on one of the largest natural history libraries in the world. Through its Richard Gilder Graduate School, the Museum grants the Ph.D. degree in Comparative Biology and the Master of Arts in Teaching (MAT) degree, the only such program at any museum in the United States. Annual physical attendance has grown to approximately 5 million, and the Museum’s exhibitions and Space Shows can be seen in venues on six continents. The Museum’s website, digital videos, and apps for mobile devices bring its collections, exhibitions, and educational programs to millions more around the world. Visit amnh.org for more information.