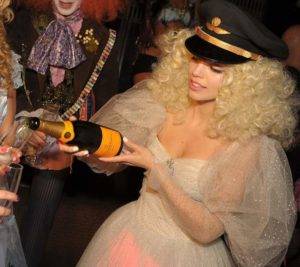 Halloween weekend in Las Vegas kicked off Friday night at TAO with Veuve Clicquot’s Yelloween celebration hosted by Ryan Kwanten.  The True Blood star, who will also be playing Charles Manson in the upcoming biopic, was dressed up for the holiday as gangster.  Up in the club, Kwanten and friends took over a VIP table in the moat section that was stocked with Veuve Clicquot Yellow Label Champagne. Kwanten took to the catwalk and fans cheered as DJ Crooked shouted out his arrival.  To toast the celebration, a magnum of Veuve Clicquot was delivered via zipline. 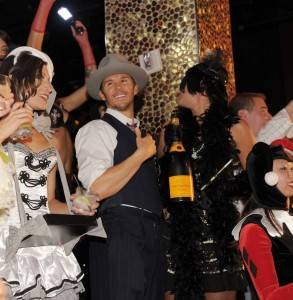 Veuve Clicquot’s Yelloween celebration in Vegas continued on Saturday night at LAVO. 90210 star AnnaLynne McCord hosted the event to help raise awareness for The Blind Project.  The Blind Project is a collective of passionate individuals uniting together, leveraging their unique talents to empower victims and survivors of the commercial sex trade in Southeast Asia.

The star arrived with her sister Angel and a group of friends clad in Alice in Wonderland costumes.  AnnaLynne walked the red carpet as The White Queen, while Angel dressed as Alice.  Her agent Melissa Hirschenson came as the Queen of Hearts and the Mad Hatter was John Lewis.

Upstairs the sisters danced the night away to the sounds of DJ Crooked and toasted to the event with AnnaLynne pouring glasses of Veuve Clicquot Champagne for her Alice in Wonderland group.  Annalynne added to her White Queen costume, by swiping and donning the pilot hat from actor Aaron O’Connell’s get-up.

President Obama Is Still My President