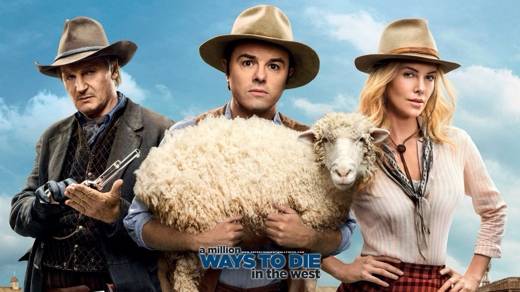 A Million Ways To Die In The West is Seth McFarlane at his best and an instant comedy classic. With truly filthy jokes, racist jokes, just plain stupid jokes, scatological sight gags, and everything we have come to expect from the chronically adolescent mind of McFarlane, I laughed my ass off!

The story is basic – Albert (Seth McFarlane) loses his girlfriend, Louise (Amanda Siedfried) to Foy, a big moustachioed dandy (Neil Patrick Harris) and tries to get her back by a) making her jealous with a fake girlfriend (wonderfully played by Charlize Theron), who is on the run from her outlaw husband (Liam Neeson).  And b) challenging Harris to a duel.  The problem is, he can’t shoot….at all. Love ensues between Theron and McFarlane as she teaches him to be a sure shot.  But there are two problems – one, there are a million ways to die in the West and two, Anna has a real ornery husband!

The cleverest part of the film is that, there was no attempt to make this an actual Western.  Instead of creating a period piece or a straight parody, McFarlane infused current day thinking into the characters.  Thus, we at the audience get to hilariously rethink the genre.  Everyone is perfectly cast, except for Neeson, who at times seemed like he was in a different film!

Not for the delicate, this film is no-holds barred and every effort is made to offend everyone.  I loved this so much, I will definitely see it twice!

Spas Go Back To Basics